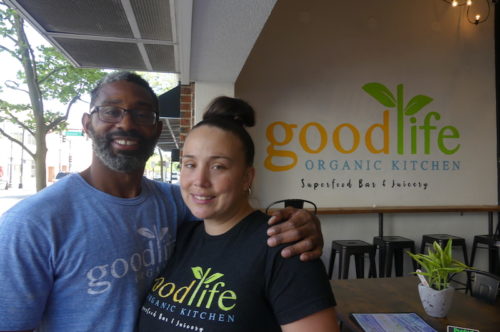 Melvin and Anita Pierce outside their healthy-eating restaurant at 60 Broad Street. (Photo by John T. Ward. Click to enlarge)

Sweethearts since high school, a Shrewsbury couple has staked a claim in downtown Red Bank with their first-ever business venture.

Read all about them and other news in this edition of redbankgreen‘s Retail Churn. 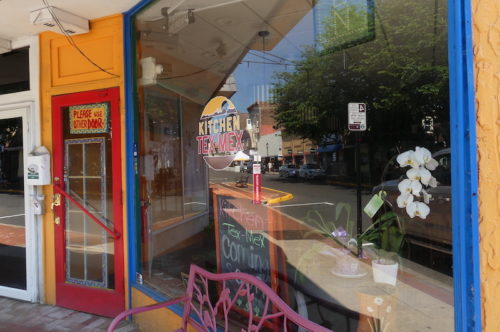 Kitchen Tex-Mex is setting up at 31 Monmouth Street. Below, Fusion School of Basketball has opened on Drs. James Parker Boulevard. (Photos by John T. Ward. Click to enlarge.)

• Anita and Melvin Pierce, who started dating before they graduated Red Bank Regional High in 2003, have opened a Good Life Organic Kitchen franchise at 60 Broad Street.

The couple – parents of five children, including a nine-week-old – said they’ve gone all-in on the smoothie, salad and “superfoods” bar.

“We worked out butts off all these years” for other people, said Anita, who worked in customer service before becoming a stay-at-home mom.

“It’s time to take a chance on ourselves,” added Melvin, who worked as a truck driver.

The space, in a building owned by the Morgan family, was recently vacated by Luigi’s Ice Cream. It features an architectural element that’s unique downtown: an outdoor seating area that’s inset into the structure and protected from the elements  – perfect for enjoying a kombucha and beet-and-quinoa burger on a nice day.

It replaces Mariachi Tipico at that address, which itself succeeded Carlos O’Connor’s.

The business owner could not be reached for comment.

According to the business website, Fusion is owned by Tomora “Teeigh” Young, a RBR and Rutgers hoops standout and former assistant director in the borough parks and rec department, and Amanda Frost, who “got her start and developed her passion for basketball” in Red Bank rec.

The space, at the corner of South Bridge Avenue, was last occupied by Detour Framing, and for many years was the home to a staircase builder, B&C Custom Wood Stairs and Rail.

To guitar aficionados, though, the building is known as the late-1940s birthplace of Danelectro amplifiers and guitars, which were popularized by Jimi Hendrix and Jimmy Page of led Zeppelin.

• The Schwab brokerage branch at 70 White Street, which we reported in December would be closing, plans to relocate to the Vault, the rebrand of the onetime bank at 55 Broad Street, Churn has learned.

A move-in date was not immediately available.

Saxum Real Estate owns the classical structure at the corner of Broad and Wallace streets and is in the process of remodeling the interior. Smith  Barney was the most recent tenant, but moved out in 2012.

• Though its windows have been papered over longer than expected,  Artichoke Basille’s Pizza is within about a month of opening at 177 Broad Street, co-owner Francis Garcia tells Churn. Stay tuned.

• Churn saw kettlebells and free weights being delivered this week to the planned Alpha Fit gym, in the former Atlantic Glass building on the southeast corner of Maple Avenue and White Street.

No word on an opening date yet, though.

• The building that houses the School of Rock at 52 Monmouth Street changed hands in March, according to a deed filed with Monmouth County this week.

Racco could not be reached for word on whether any changes in tenancy are expected.