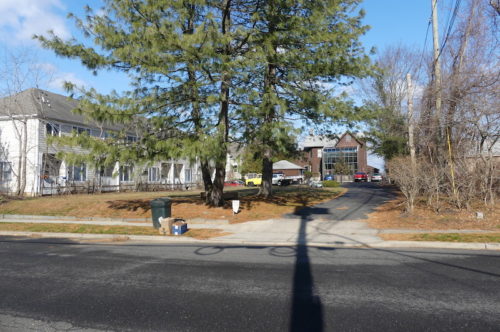 After revisions, a plan to build a house in front of the existing four-family at 70 Locust Avenue was approved. (Photo by John T. Ward. Click to enlarge.)

Much of Red Bank’s zoning board agenda was scrapped Thursday night, when hearings on plans for several large apartment projects had to be rescheduled.

But the board got some work done, approving a plan for new house single-family  house on Locust Avenue.

Here’s a rundown of the two-hour session, conducted online via Zoom:

• A proposal to add dormers to a five-apartment house at 57 Peters Place was approved.

The work would change the slope of a roof so that the lowest part of the ceilings in the top-floor apartment would raised two feet, to six feet in height.

• Stephen Houck and his mother, Lonnie Gordon, won approval to erect a new house in the front yard of the existing four-family at 70 Locust Avenue.

The unanimous OK followed a revision to the original plan, which called for the new dwelling to be sited on the western edge of the property, close to the Bellhaven Commons condos.

Urged by the board earlier this year to discuss the plan further with condo owners, Houck and Gordon agreed to site the new house on the eastern edge, where the abutting neighbor had no objections.

•  The continuation hearing on a plan for 10 apartments at at 273 Shrewsbury Avenue, on the northeast corner at Drs. James Parker Boulevard, was not held. Officials said it had been listed on the agenda in error; the next hearing is scheduled for June 17.

• The plan that was supposed to be shown on the agenda in place of 273 Shrewsbury was developer Roger Mumford’s proposal for new apartments and stores at 234 and 240 Shrewsbury Avenue.

But the hearing had to be scrapped amid a welter of confusion over the accessibility of documents, and was rescheduled to June 17.

• A proposal by Park Valley Development to erect 32 apartments and street-level retail at 120 Monmouth Street was rescheduled for August 5.