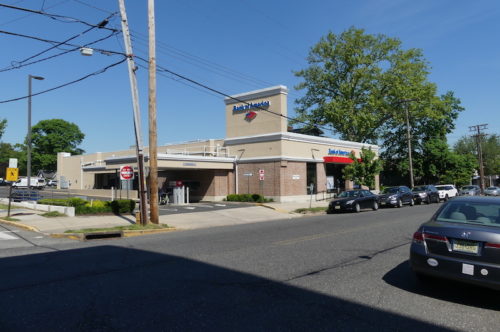 The bank plans to remove the pylon that’s topped the building since it opened as a supermarket 70 years ago. (Photo by John T. Ward. Click to enlarge.)

A ’50s-style rooftop pylon can go, but the paint colors proposed for a makeover of a downtown bank proved an issue for the Red Bank Historic Preservation Commission Wednesday night. 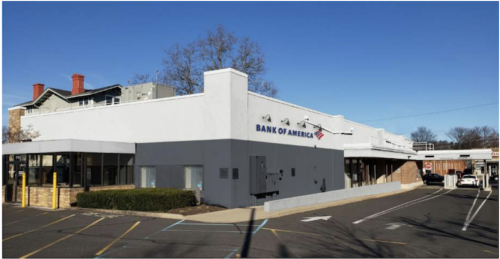 A rendering depicting the new colors on the southwest corner of the building. (Bank of America image. Click to enlarge.)

The Bank of America branch, at 170 Broad Street, opposite the post office, is not considered historic. It was built to house an Acme supermarket that relocated from the Whitfield Building, at 73 Broad, in 1951.

But the building is within the downtown historic district, and so its plan to modify the exterior as part of a national brand refresh needed the HPC’s blessing.

The building still sports a modified version of a rooftop pylon that originally sloped jauntily on one edge. Designed by local architect Bernard Kellenyi, it was meant “to attract the motorist’s eye,” historian Randall Gabrielan wrote in one of his Images of America books on Red Bank.

Under the bank’s makeover plan, the feature would be eliminated. And the HPC had no issue with that aspect of the proposed makeover when it reviewed the plan at its monthly meeting, conducted via Zoom.

“I like the idea of pulling that tower down,” said vice chairman Kal Pipo. “It doesn’t seem to serve any architectural purpose, and [removing it] does make the building look cleaner.”

Councilman Ed Zipprich, liaison to the HPC, said he agreed, mistakenly adding that the structure “was built in the 1970s.”

Pipo, though, he said he objected “pretty strongly” to the colors of paint that would be applied where there’s no brickwork.

“I have to be honest: I’m not a big fan of white and gray,” he said. “To me, the historic district is more an earth-toney kind of color palette. And so I’m not really liking that much at all.”

The gray, he acknowledged, would be used only in one area toward the rear, alongside the parking lot on Leroy Place.

Pipo asked: With a wide color palette to choose from, why these two?

Carol Silsbe, a representative of Project Expediters Consulting Corp., the contracting firm hired to do the work, said she understood that the bank had chosen the gray from the Benjamin Moore line of historic colors to match the borough standard, as specified in an historic sign ordinance.

The white, she said, was a standard white.

She asked several times for confirmation that the gray was allowed under the borough standards, but the request went unanswered.

Pipo responded that, “of course it’s a modern building, but what we try to do is take these modern buildings, where possible, and have them blend as much as possible into the surrounding area.”

Zipprich noted that the historic Anthony Reckless mansion is located right next door to the bank.

The board agreed to approve the makeover, on the condition that Pipo confirm that the colors meet to the borough’s preferences. If he objects, the matter will go back to the full board.

• Speaking of history, here’s some trivia: when the Acme store opened on June 20, 1951, it debuted some startling new technology, according to a report in the now-defunct Red Bank Register.

“One of the features which gained considerable attention was the automatic front exit doors,” the newspaper reported the next day. “If the shopper prefers to carry bundles from the store rather than have them carried to the car by a clerk, there need be no worry about pushing the door open.”