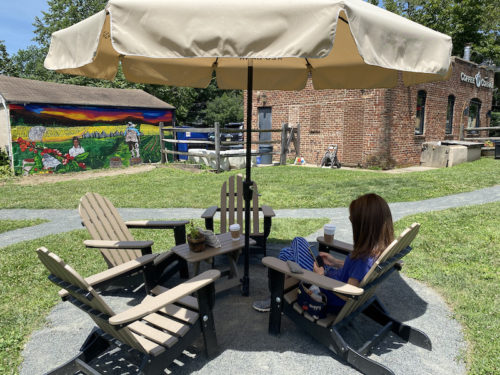 A customer checks her email at one of the new seating areas at Coffee Corral. (Photo by Chris Ern. Click to enlarge.)

It’s a warm summer night as Jessica Olszewski relaxes in an Adirondack chair while her wife and young daughter dance to live jazz under glimmering lights outside the Coffee Corral in in Red Bank.

A new, post-pandemic vibe has captured the attention of locals at the busy corner of Shrewsbury Avenue and Drs. James Parker Boulevard. There, owners Courtlyn Crosson and Erich Reulbach have developed their business into what Reulbach said is now “more than just a coffee shop on the corner.”

“It’s family-friendly. I have my wife and daughter here, and she’s able to run around and enjoy the live music,” says Olszewski, of Tinton Falls. “It’s a lot of what we couldn’t do for so long.” 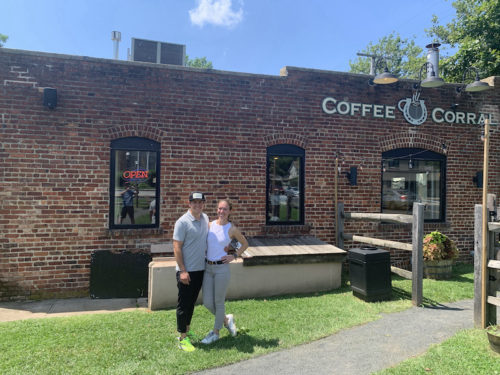 Erich Reulbach and Courtlyn Crosson in the yard outside their shop. Below, customer Kate Okeson relaxing in the shade. (Photos by Chris Ern. Click to enlarge.) 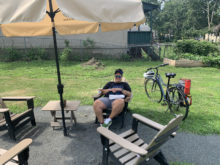 Crosson’s father, builder Russ Crosson, launched the business as a grab-and-go in 2012. But as the pandemic tightened its grip in 2020, his newlywed daughter and son-in-law took advantage of the acre of grass surrounding the tiny brick shop, adding clusters of socially-distanced chairs linked by a cinder path.

With the changes, it was clear that the Coffee Corral began to shift from a quick in-and-out stop for commuters to a true destination, as the outdoor arrangements “drove an immediate neighborhood feeling,” Crosson said.

Now, the business is helping re-establish a sense of community by offering a place to meet and relax under a shady umbrella or the twinkle of café lighting, she said.

In recent months, seventh- and eighth-graders from the Red Bank Middle School have planted a community garden, while others have painted murals on two sides of the garage, visible from both streets.

In addition, Crosson and Reulbach have expanded live music nights to Wednesday through Friday, and during the day on Saturday and Sunday, throughout the summer.

The music, garden and murals add to a calendar that includes occasional events such as autumn pumpkin-picking, pony rides and rescue-pet adoptions.

Customers have taken notice. One, who declined to give his name as he relaxed on a warm morning last week, called the atmosphere “serene.”

“I love having more of a non-alcoholic bar setting that is outdoors and in town,” said Kate Okeson, who chairs the borough Human Relations Committee. “I appreciate that neighborhood, drop-in feel.”

“It’s a good atmosphere,” said borough resident Scott Broschart. “It’s more vibrant, and there are more people in and out.

“Anywhere there is outdoor community space is a positive to help bring the neighbors together,” Broschart added.

Crosson said the response has given her employees a “massive morale boost,” but it’s also created a “ripple effect” in the neighborhood.

“We want our neighbors to feel like they are welcome here,” she said.

“To see it pay off is a great feeling,” Reulbach added.

Russ Crosson won planning board approval in 2018 to redevelop the site with a new building, but Courtlyn and Erich said they are keen on keeping what they have going.

“Once we commit to something, we’re committed,” she said, adding that the construction plans have been shelved indefinitely.