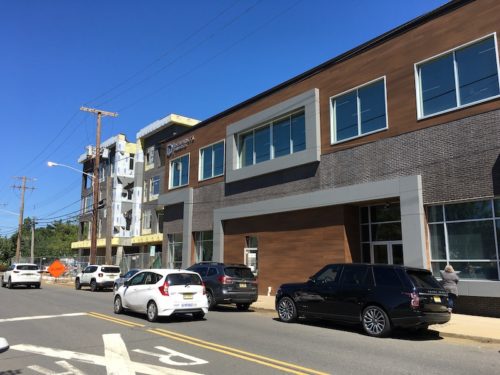 A view of the Rail project from Chestnut Street, with the existing office building at right and the new residential portion at left. (Photo by John T. Ward. Click to enlarge.)

For nearly four years, it’s been slowly emerging from the ground alongside the Red Bank train station. Now, most of the block bounded by Bridge Avenue, Chestnut and Oakland streets is a teeming site of construction activity.

So What’s Going On Here? Here’s the latest. A 2019 rendering of the Rail project, with Chestnut Street at the bottom. The lot at left is not part of the development. (Rendering by Rotwein + Blake. Click to enlarge.)

Branded as “The Rail,” the project is finally nearing completion, a representative of developer Denholtz Properties told redbankgreen recently.

First approved by the planning board in October, 2016, the mixed-use development called for 45 apartments, along with onsite parking hidden below the residences, as well as retail and office space.

Two years later, after Denholtz acquired adjoining properties that had been the home to restaurants on Oakland Street, a modified plan that added 12 apartments to the mix also won approval. (A parking lot at the corner of Bridge and Chestnut is not part of the project; that’s owned by St. Anthony of Padua Church.)

Jordan said monthly rents for the one- and two-bedroom units will range from $2,600 to $4,100. Amenities include a club area, a gym, yoga studio and outdoor seating for residents.

Additional parking parking for tenants is to be provided a block away in a lot Denholtz owns on Herbert Street.

At street level, Sea Bright-based Melonhead, a purveyor of juices and acai bowls,  remains the only announced tenant of the 6,000 square feet of approved retail space.

Tied into the new construction is an existing two-story office building at 116-118 Chestnut, where Denholtz Properties is now based after many years in Matawan. That structure has gotten extensive renovations as part of the Rail project, including a facelift to match the new construction.