A view east along River Road from 2016. Below, a 5G repeater atop a pole alongside Route 35 in Shrewsbury in 2018. (Photos by John T. Ward. Click to enlarge) One measure would reduce the vehicular speed limit on the road for the full width of town. Another would tap the brakes on an anticipated proliferation of wireless telecom infrastructure on utility poles along that road and and elsewhere in the borough.

The council also took action on upgrades to the historic Bicentennial Hall. 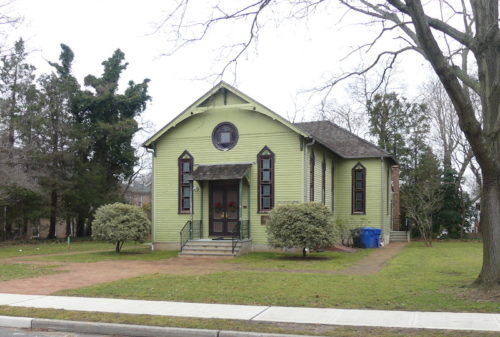 A parking lot would be created along the right side of Bicentennial Hall, among other changes. (Photos by John T. Ward. Click to enlarge)

At the meeting, which was chaired by Council President Chris Rodriguez in the absence of Mayor Ben Lucarelli:

• The council endorsed a resolution seeking a reduction in the speed limit on River Road to 25 miles per hour.

The limit is now 35 MPH from the Red Bank border east to Hance Road, and then 30 MPH to the Rumson border.

The borough’s 2017 Active Transportation Plan recommended reducing the limit to improve safety for pedestrians and cyclists.

The road is under the jurisdiction of Monmouth County. Borough Administrator Theresa Casagrande said she has been assured by officials in Freehold that the request will go before the county commissioners in August, when approval is anticipated.

Rodriguez said he hoped that the change would influence Red Bank and Rumson to follow suit. He said he had witnessed vehicles “barreling down from Rumson into Fair Haven” at 50 or 55 MPH Sunday night.

Councilman Mike McCue voted no on the change, and Councilwoman Susan McCabe abstained.

Afterward, McCue told redbankgreen that he prefers reducing speeds by 5 MPH from current limits, from 30 in the center of town and 35 on the outskirts. “Lowering the speed limit 5 mph across the board would have been a good compromise for cyclists and motorists,” he said via email.

During the public comment, River Road resident Ruth Blaser was critical of the reduction.

“Don’t cars have any rights anymore?” she asked. “To get from one place to another in a reasonable amount of time? The bus company’s going to love this.”

• The council also introduced an ordinance aimed at the deployment of so-called 5G wireless antennas by telecom giants in public rights-of-way.

The 16-page ordinance and “right-of-way use agreement,” which is based on language being adopted elsewhere, can be found in the meeting agenda.

The rollout of the faster service requires many more antennas than currently used to provide wireless.

Borough Attorney Greg Cannon told the council that the three wireless giants –AT&T Wireless, Verizon and T-Mobile – hire contractors to identify locations for installations on utility poles and elsewhere, “and it becomes a land grab, for lack of a better term.”

The proposed ordinance, which is scheduled for an adoption vote at the July 26 council session, “is a very effective ordinance at putting controls in place” until pre-empted by new state legislation or action by the state Board of Public Utilities, he said. “This is more protective of the town than it may end up being operative.”

The historic structure, on Cedar Avenue, is contemplated as an eventual replacement space for council, planning board and zoning board meetings, which are now held in a cramped basement room at borough hall.

Changes include a 12-space parking lot with two ADA spots; a new ADA-compliant entrance on the south side of the building; and the creation of a dais in what’s now the front entryway.

Casagrande said the facilities committee chose that orientation of the dais “because we did not want to destroy the altar or the choir loft” that are remnants of the building’s origins as Fisk Chapel.

The trees on the lot would be preserved, said Rodriguez.

The borough is hoping to land a $200,000 Community Development Block Grant administered by Monmouth County against the estimated $321,000 cost of the changes, said Casagrande.

The building needs additional work, beyond the ADA improvements, that would raise the estimated expense to $650,000, she said in response to questions from Councilwoman Megan Christner-Keefe.

“It’s going to need to be done regardless” of whether the grant application is successful, Casagrande said.

Here’s a schematic of the proposed parking lot changes. Here’s a breakdown of estimated costs. And here’s one of three concept plans for to make the space usable as a council meeting room.