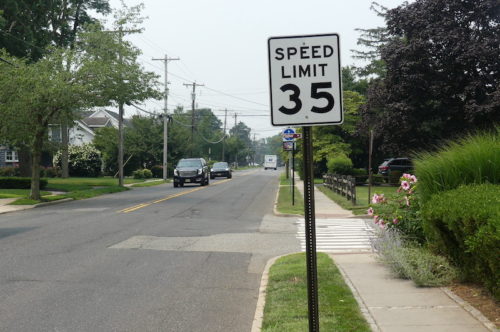 The speed limit on the full length of Front Street/River Road through town would be reduced to 25 miles per hour under a Monmouth County proposal. (Photo by John T. Ward. Click to enlarge.)

A ban on fireworks, a new executive director for the redevelopment agency, a reduced speed limit and more crowd a busy agenda when the Red Bank council holds its only regular session of July Wednesday night.

• The 2021 budget is up for adoption. It calls for no tax increase, according to Councilman Hazim Yassin, who chairs the finance committee.

A separate public presentation on the spending plan was not scheduled as promised at the council’s July 7 workshop session by Chief Financial Officer Peter O’Reilly. “Surely there will be some questions asked,” he said at the time.

Borough officials, including Yassin and O’Reilly, did not respond to a redbankgreen inquiry asking why the session was not slated.

• Facing an August 21 state deadline to come up with a plan to zone for legal cannabis businesses, the council will introduce an ordinance with some blanks yet to be filled in.

The ordinance would ban “public consumption” of cannabis products on sidewalks, in parks and other public places. While it contains language specifically addresses smoking of cannabis, the law makes no exception for ingestible forms of the drug.

The planning board is expected to review the proposal prior to the council’s next regular session, scheduled for August 18.

• Appointing Cherron Rountree, the township administrator in Holmdel, as executive director of the Red Bank Redevelopment Agency, at an annual stipend of $15,000.

Rountree is the township administrator in Holmdel, a job she would keep as she replaces Ziad Shehady as agency executive director.

The job of borough business administrator, vacant since Shehady’s resignation in April, is being filled on an interim basis by police Chief Darren McConnell.

• The council is expected to endorse a Monmouth County proposal to impose a 25-mile-per-hour speed limit on the full length of county Route 10 through town.

That’s West Front and East Front streets and River Road, the only street that runs the full width of town without interruption. The current limits are 30 MPH on the western portion and 35 on the eastern, and 25 in the central stretch through downtown.

Fair Haven’s council last week approved a county plan to reduce the speed limit on its portion of River Road from the Red Bank border to Hance Road, and 30 MPH from there to the Rumson border.

• As previously reported by redbankgreen, the council plans to adopt a law banning unapproved fireworks.

• A request for proposals from firms interested in the job of preparing a new Master Plan is expected to be issued.

• Settlement of a lawsuit brought by the Tower Hill Condominium Association over $146,000 worth of disputed water billing.

• Renewal of an agreement allowing the Count Basie Center for the Performing Arts to charge patrons to park in the borough hall parking lot on nights when no municipal meetings are scheduled.