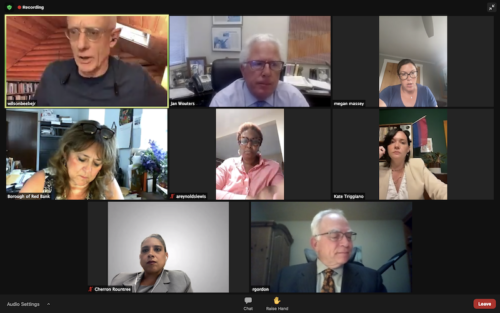 The prospective new manager of the Red Bank Redevelopment Agency appeared onscreen without introduction during its monthly meeting Tuesday evening.

Cherron Rountree, who now serves as township administrator in Holmdel, also did not speak, even as former council member Cindy Burnham said her appointment should be halted by a pending sexual harassment lawsuit in which Rountree is a defendant.

Rountree’s appointment as agency head is up for approval by the borough council Wednesday night. A resolution says she would be paid a stipend of $15,000 per year.

The job was previously held by Ziad Shehady, who resigned from the agency in February and as borough business administrator last month.

Rountree did not respond to questions emailed to her by redbankgreen Tuesday evening. Among them: whether she’s also a contender for the administrator’s job.

During the public comment portion of the meeting, Burnham noted that Rountree is named as a co-defendant in a lawsuit from her time as business administrator in Rahway.

Without referring to Rountree by name, Burnham said, “this person is accused of enabling a sexual stalker.”

Rountree, according to the suit, knew of Steinman’s romantic feelings toward Rolong and encouraged him to share them with Rolong, according to NJ.com.

The case is slated to go to trial in Superior Court in Union County starting August 23. Here’s the complaint as amended in May, 2019: Rolong v. Rahway amended complaint

Rountree served as municipal administrator in Rahway and Eatontown before taking the job in Holmdel in October, 2019, almost 16 months after Rolong filed her lawsuit.
Under her contract with Holmdel, Rountree is to be paid $730,000 over four years, at annual rates that started at $175,000 and rise to $190,000.

The contract allows outside activities “such as teaching, consulting, or board or charitable service, subject to the approval of the Township Committee,” but says “no outside involvements shall interfere with the day-to-day management responsibilities of the Township, interfere with the overall performance of duties, or create a condition where a conflict of interest would exist with regard to the Township.”

Neither Rountree nor any redevelopment agency members addressed Burnham’s comments.

“Unfortunately, you’re not official yet, so you’re not in this executive session,” agency attorney Ron Gordon told Rountree.