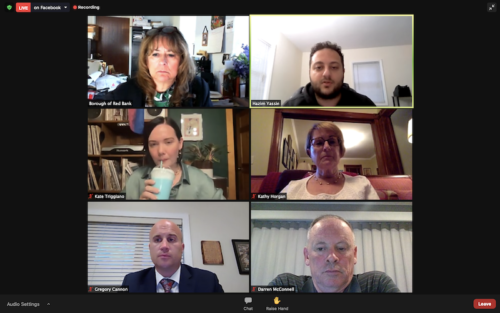 A screengrab from Wednesday’s virtual meeting, which was chaired by  Councilman Hazim Yassin, top right. (Click to enlarge.)

Red Bank property owners will see no increase in the local tax rate under the budget introduced by the borough council Wednesday night.

The governing body also finalized a plan for a charter study referendum that several commenters referred to as “historic;” eliminated the job of animal control officer to make way for the Monmouth SPCA; and tabled the hiring of a new executive director of the Redevelopment Agency. The 2019 concept plan for Marine Park included relocating the parking lot from the foot of Wharf Avenue to the former site of the tennis courts. Additional details can be found here. (Click to enlarge.)

Here are some highlights from the two-plus-hour session, which was conducted remotely via Zoom and Facebook Live:

• Councilman Hazim Yassin, liaison to the finance committee, reported that the 2021 spending plan has no increase in the municipal property tax.

“We did a really good job with it,” he said, citing the finance committee, interim business administrator and police Chief Darren McConnell and chief financial officer Peter O’Reilly for the work.

Coming off last year, when the rate increased 2.9 percent, “we made some really prudent decisions so it doesn’t get out of hand for the next two, three, five years,” Yassin said. “It looks like we’re going to have a really healthy budget this year and for the foreseeable future.”

He gave no details, and the document was not immediately available. It will be posted on the borough website’s finance department page Thursday morning, said Clerk Pam Borghi.

In addition, a public budget presentation will be scheduled prior to the adoption vote, slated for July 21.

In 2020, the owner of a residential property assessed at the town average of $366,231 paid $2,267 in municipal taxes, not including levies by Monmouth County, two school districts and the borough library.

• As expected, a charter study referendum will be on the November ballot. All four council members present at the time of the vote endorsed the ordinance.

The public question will ask voters if they favor a review of the borough’s form of government, and if so, who should fill the five spots on the review commission.

Two candidates for the commission have announced their intention to seek seats. One is Ben Forest, an activist and borough board of education member from Locust Avenue, who declared his intention during meeting comments.

He said the council’s vote marked “an historic day for Red Bank,” one that “will probably improve tone of deliberations.”

Scott Broschart, of East Bergen Place, who has championed non-partisan elections for several years, told redbankgreen after the meeting that he’ll also seek the requisite petition signatures for a spot on the ballot, where the number of candidates is unlimited.

“I look forward to working with a bi-partisan group of open-minded residents eager to fix our out-dated and broken local government,” Broschart said.

• The council approved a $20,000 contract with consulting engineer CME Associates to complete designs for a new parking lot in Marine Park.

Building of the lot is the first phase of an planned extensive makeover of the park, which fronts on the Navesink River. Eventually, the existing 78-spot parking lot would be eliminated and replaced with green space.

Wallace Street resident Paul Cagno questioned both the need for the new lot, which would be created on the site of red clay tennis courts destroyed by Hurricane Sandy in 2012, and the order of events. If the larger makeover isn’t completed, the town will be stuck with two parking lots and less parkland, he said.

“Shouldn’t we have a resolution that says what we’re going to do down there in its entirety?” he asked.

“This is the first step of revitalizing Marine Park,” said Councilman Erik Yngstrom, liaison to the parks and rec committee. “Our council’s prerogative and direction is to implement the plan Kimley Horn has set forth,” he said, referring to the design proposed by a planning firm in 2019.

• Over objections that the matter should be tabled, the council formally eliminated the one-person animal control operation and endorsed a contract with the Monmouth SPCA.

A number of residents challenged the change. Dan Riordan of Irving Place argued that because “the training to become an animal control officer is seven days long,” the SPCA contract does not qualify as a professional services agreement, exempt from bidding requirements, and should be put out to bid.

Alexis Gasiorowski, an attorney, insisted that the council first consider a proposal submitted by the American Humane Society just hours before the council met. McConnell said he had not seen it.

Henry Perez, who has served as animal officer for at least 15 years, is expected to be reassigned within the public works department.

• Mayor Pasquale Menna and Councilman Michael Ballard were absent. Yngstrom left before the session ended, and Councilman Ed Zipprich arrived near the end.

Yassin asked for prayers for the absent members, whom he said were dealing with unspecified health issues of their own or of family members.

• Yassin, as council president, led the meeting in Menna’s absence. This month, Yassin lost the Democratic primary race for two seats on the council in the November, coming in third behind running mate Triggiano and challenger Jacqueline Sturdivant. Challenger Bruce Maida was fourth.

• The appointment of Cherron Rountree as executive director of the Redevelopment Agency was tabled.

With the mayor and two council members absent, “I just don’t think it’s good idea to pass it with four of the seven members” of the governing body present, said Yassin.

• In response to a resident’s inquiry, Borghi said in-person council meetings are unlikely to resume until September.

McConnell said he was working with the borough’s information technology consultant to get quotes for a hybrid system to enable simultaneous in-person and remote meetings.

• At the meeting’s adjournment, the council went into closed-door executive session to discuss litigation and possible property acquisition, McConnell said, without offering specifics. No formal action was to be taken, he said.