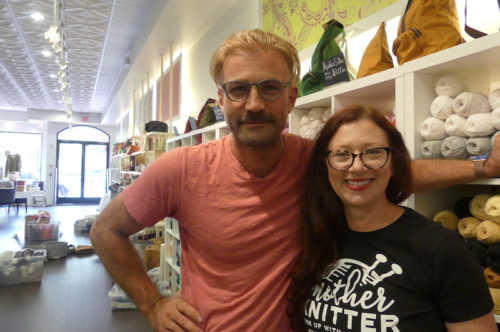 In this, the first Retail Churn update of autumn, 2021, we turn our attention to sweaters, hats and mittens.

That’s because downtown Red Bank is about to get a new yarn shop, one that its owners envision as a “studio” for knitting and crocheting enthusiasts. 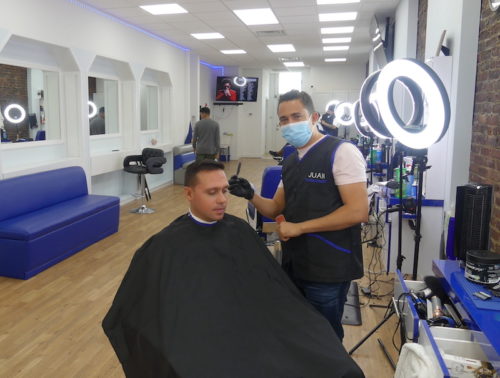 Juan Morales cuts a customer’s hair in the new home of House of Fades, which he owns with Robinson Hernandez. (Photo by John T. Ward. Click to enlarge.)

Mother Knitter is three years old, but until now has not had a storefront. Instead, the business has served as the exclusive American distributor for northern Europe’s largest yarn producer, Sandnes Garn, based in Norway.

Laurie, a knitter, had been bringing coveted Sandnes wool home from visits to Vidar’s homeland for 20 years when she decided they should both apply their skills in digital marketing to a business of their own. She persuaded Vidar to cold-call the company’s CEO and ask for rights to serve as the North American distributor.

“Norwegians are not very good at selling, and figuring out how to grow their markets,” Vidar, who calls himself a serial entrepreneur, told Churn. “I said to the CEO, ‘give us a chance.'”

It turned out that Sandnes already had a Canadian distributor, but not one in the United States. The Brekkes landed the contract.

After remortgaging their Atlantic Highlands home and launching operations in their basement, the couple now own a warehouse in Union Beach, through which they distribute wool and other knitting products to some 70 stores across the U.S., as well as directly to Mother Knitter’s online customers.

Once they found the Broad Street space, located next door to Tiffany & Co., Vidar said he and Laurie took the approach of “what would Apple do if it had a yarn store?”

Their answer: a room with lots of open space and light, lined by shelving to display hundreds of varieties and colors of yarn – and, of course, a communal knitting table.

The Brekkes and their six Red Bank employees refer to the space not as a shop but a “studio,” because it’s envisioned as a place for knitting and crocheting, yoga, art events and more.

“This is not a typical yarn store,” said Laurie. “It’s about community.”

The space was vacated in June by Doubletake Consignment.

• Anyone whose ever gotten a haircut at House of Fades, at 8 Monmouth Street, knows what an intimate affair that could be. For the past nine years, the popular little shop has been packing ’em in for distinctive tonsorial stylings.

As of last week, though, owners Robinson Hernandez and Juan Morales and their crew have lots of elbow room in which to work. The shop has relocated a couple of doors west, to 18 Monmouth. Last tenanted by Paint-A-Tee, the space is almost three times the size of the former location, Hernandez said.