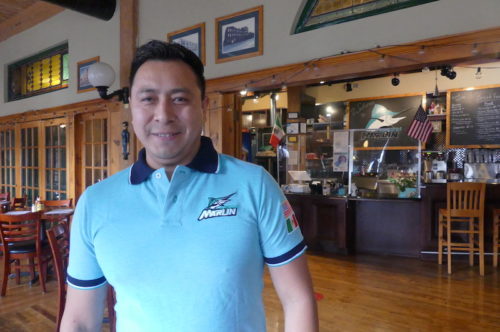 The owner of a new Red Bank restaurant quit his job in auto repair to open his first business in the space vacated by friends earlier this year.

Also in this summer-doldrums edition of redbankgreen‘s Retail Churn: a Norwegian knitting store and a health spa plan openings, and a group of artists hope to hang onto their space. 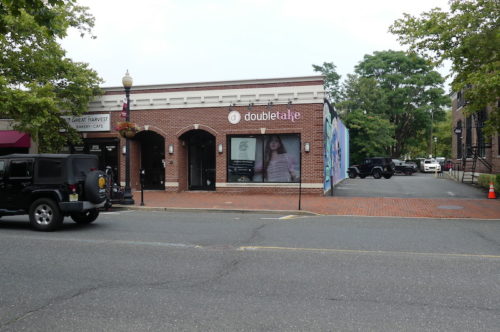 A Norwegian yarn shop plans to open in the space occupied by Doubletake for the last 11 years. (Photo by John T. Ward. Click to enlarge.) Thirty-three-year-old Mario Segundo, who owns the business with Humberto Hernandez, tells Churn he’s close friends with the owners of Salinas Café, and ate weekly in their restaurant.

But the café was plagued by bad timing during its short tenancy, which began a year ago in the midst of the COVID-19 pandemic. When its owners told Segundo of their plan to seek another location, he decided to leave his job in an auto body shop and go back into the restaurant business with his own, first venture in the Galleria space, he said.

“Back,” because he’d worked in the restaurant business starting at age 9, when he started tagging along to the Mexico City eatery where his older brother worked. After years of taking out the trash, he graduated to working in the kitchen as a teenager.

The restaurant turns out to be a rarity in the Red Bank area as a Mexican eatery spotlighting seafood, says Segundo. “Mariscos” is Spanish for seafood, and “marlin” is part of the name because, well, Segundo just likes that species of fish, though it makes an appearance on the menu only in tacos. The main ingredient in most of the dishes is kingfish, he said.

The menu also includes a chicken dish, a vegetarian cheeseburger and a children’s section.

• After 11 years at 97 Broad Street, Doubletake Consignment Boutique closed its shop in late June. The “luxury consignment boutique” still has a store in Short Hills and an online shop.

• The Doubletake space already has a taker: Mother Knitter, a purveyor of Norwegian yarn.

A sign in the window says “Coming in September. Now hiring sales associates and knitting instructors.”

• “Opening soon” at 12 Broad Street is a business called Evolve, a “medical spa and lifestyle brand,” according to its website.

“We are New Jersey’s trusted destination for face, body and injectable treatments, delivering the highest quality medical aesthetic services in a boutique, client-oriented environment,” the website says. Among its services are injectable treatments such as Botox; skin rejuvenation; body contouring; and hair restoration.

The business has locations in Hoboken, Jersey City, Montclair and Short Hills.

The Broad Street storefront has been vacant since the departure a year ago of Pinot’s Palette, a painting-party studio.

• Sara Perez Jacinto is planning to open a juice store at 28 Monmouth Street, according to a recent development permit granted by the borough. Love Me More clothing boutique operated there until earlier this year.

• The Nissan World automobile dealership on Newman Springs Road has a new owner and management, and has been rebranded as “Nissan City of Red Bank.”

Integrity NSR LLC bought the property for $6.25 million in May, according to records filed with Monmouth County.

• Since the 2020 holiday season, artists Mike Quon, Colin Goodall, Steve Schiro and Tyler Nunnally-Duck have maintained a “pop-up” art and gifts collective at 86-88 Broad Street, where Alfonso’s Pastry Shoppe closed 14 months ago, a victim of the pandemic.

“Now, as the pandemic eases, interest is back from investors wanting to turn the space back into a restaurant,” Quon tells Churn. “But, we hope, not so fast.  We hope the space can continue for art and small businesses.”

With Schiro gone and Nunnally-Duck scheduled to leave September 15, Quon and Goodall are hoping to find one or two fellow tenants for the 3,400-square-foot space – “a book store, a toy store, an artist” – to split the rent and “balance our various needs for workspace,” said Quon.

“The one requirement is mutual calm enjoyment,” he said. “Nothing excessively loud or smelly, for example.”

Assuming the right partners come on board, they’d then try to negotiate a fixed lease with the building’s owner, said Quon, who can be reached at 908-675-3518.