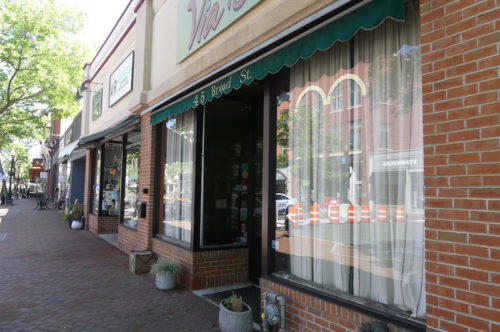 Elli’s Backyard plans to open in the space vacated last year by Via 45. (Photo by John T. Ward. Click to enlarge)

That story and more in this edition of redbankgreen‘s Retail Churn. 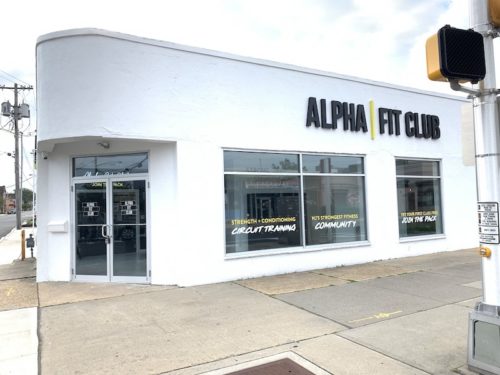 Alpha Fit has spruced up the former home of Atlantic Glass, at Maple Avenue and White Street. (Photo by John T. Ward. Click to enlarge.)

• Elli’s Backyard plans to open at 45 Broad Street, the former home of Via 45.

The restaurant, located in the Broadwalk shopping and dining plaza, is the first business venture of 23-year-old Patrick Jeffrey of Keansburg, and is named for his four-year-old daughter, who “wants to open her own ice cream shop next door,” he told Churn.

Ambition clearly runs in the family. Patrick said he plans to be onsite seven days a week, offering breakfast, lunch, and – after a one-hour closing – dinner until 10 p.m. The menu includes burgers and pasta, he said.

“It’s all me,” Jeffrey told Churn Tuesday. “I wouldn’t put my name, or my daughter’s name, on something if I wasn’t micromanaging it every day.”

Jeffrey learned about hard work, he said, from his stepfather (and former Keansburg mayor) Anthony DePompa.

So why Red Bank? “Truthfully, whenever I imagined opening a restaurant, it was in Red Bank, and specifically on Broad Street,” he said “Obviously, the town is a little flooded with restaurants. But the community here has a real admiration for food.”

The business is on the borough Historic Preservation Commission agenda Wednesday night for a simple sign replacement. Assuming all his needed approvals fall into place, Jeffrey is shooting for an early August opening.

• Triumph Brewing Company, the Bridge Avenue brewpub that took years to open, only to be waylaid for more than a year by the pandemic, has rejoined the living.

The restaurant is open Wednesday through Sunday.

• For the past month, a restaurant called Mariscos Marlin has had a sandwich board outside the Galleria building on Bridge Avenue – across the street from Triumph – touting a “June” opening.

An April business filing with New Jersey identifies Mario Segundo Lopez and Humberto Hernandez Ruiz, both of Deal, as the managing members. They could not be reached for comment.

The space was last, and briefly, occupied by the Salinas Cafe & Restaurant, which had the misfortune of opening early in the COVID-19 pandemic.

• Alpha Fit gym has opened in the former Atlantic Glass building on the southeast corner of Maple Avenue and White Street.

The gym, which abuts the borough’s White Street parking lot, is the third Alpha Fit for founder and managing member Sam Tooley; the others are in Westfield and Verona. Meg McAleer of Lincroft is the operating partner and general manager of the Red Bank location.