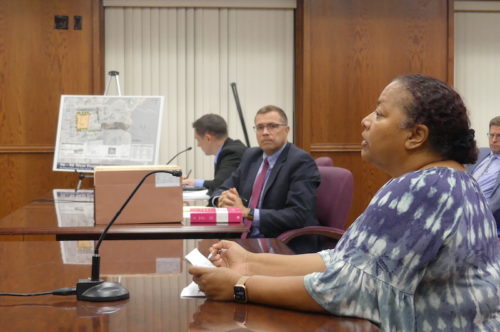 For want of a drawing, the Red Bank zoning board stopped just short of approving a plan for 10 condominium units next door to the borough library Thursday night.

When they meet again in two weeks, board members will be set to fast-track the approval, provided a new rendering doesn’t change their minds. 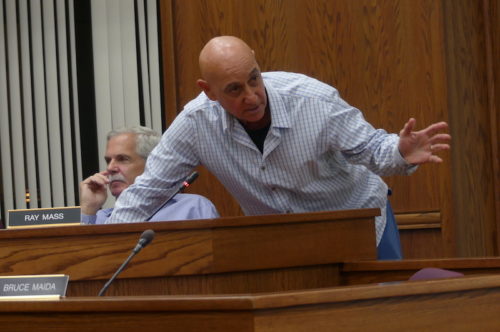 Board member Bruce Maida addressing the applicant. Below, an earlier rendering showing the West Front Street side of the project. (Photo by John T. Ward. Click to enlarge)

Proposed for 96-98 West Front Street, at the high-visibility northeast corner of Maple Avenue, developer Samuel Shamaev’s project is actually a tweaked version of one approved by the planning board in 2018 for a prior site owner, architect Michael James Monroe testified.

The earlier version called for more than 6,000 square feet of first-floor commercial space and two levels of sub-surface parking topped by eight residential apartments. The current plan would have 10 luxury condos, while slashing the commercial space down to 600 square feet, and dramatically reducing the need for parking, Monroe said.

Monroe noted that board engineer Ed Hermann, who was not present, “wasn’t too happy” that the original parking scheme would have required a 20-foot-tall retaining wall on the library side of the site.

Shamaev’s team decided to “make it a lot better and a lot simpler” by reducing the commercial space, and thus the parking area, which will now be on a single level, with some of the spaces covered by the structure. The retaining wall would now be 10 feet tall, and topped by landscaping.

But reducing the parking area, ironically, triggered a need for a floor-area-ratio variance that the two levels of parking did not need, Monroe said. A density variance was also needed: at 16.39 units per acre, the new plan slightly exceeded the 16 per acre allowed by ordinance.

As he did at the first hearing on the proposal in July, board member Bruce Maida pressed the applicant for revisions that would reduce site runoff into the Navesink River, on which the property fronts.

But the project, because of its size, is not required under borough ordinance to create a stormwater management plan, said project engineer Andrew Comi. Instead, runoff will be channeled into the 42-inch storm main that serves the area and drains into the river at Maple Cove, Comi said.

But with extensive greenery now planned for a rooftop deck and fewer cars parked onsite, the runoff will be lower in volume, and “cleaner,” than it previously was or might be, Monroe said.

“Our goal is not to make it worse,” he said. “That’s why we’re here. We’re trying to do a less intensive project.”

Board members appeared satisfied with the changes, but member Ray Mass was puzzled that the applicant did not have among its exhibits a color “elevation,” or facade rendering. Monroe agreed to provide one in advance of the board’s next session, scheduled for October 21.

In the interim, the board agreed to direct its attorney, Kevin Kennedy to prepare pre-written resolution of approval to expedite conclusion of the case, should the board OK the plan.