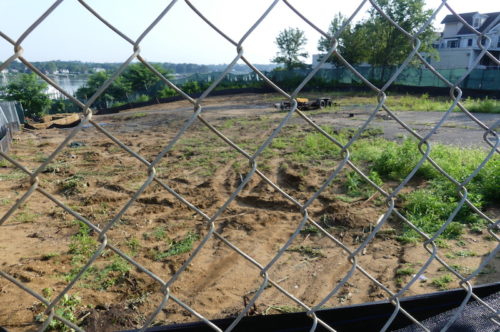 The site, at the corner of West Front Street and Maple Avenue, was cleared for construction last October. (Photo by John T. Ward. Click to enlarge.)

Zoning board hearings on a new plan to redevelop property next door to the Red Bank Public Library got underway without conclusion Thursday night. 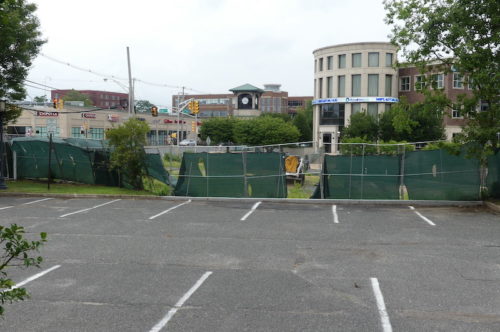 A view of the site from the library steps. Below, a rendering shows the West Front Street facade of the proposed structure. (Rendering by Michael James Monroe. Photo by John T. Ward. Click to enlarge.)

Developer Samuel Shamaeve, whose home faces the site from the Middletown side of the Navesink River, bought 96-98 West Front Street after the last owner won planning board approval to erect a four-story building with eight apartments and ground-floor commercial space.

Shamaeve, though, has reduced the amount of commercial space, added two apartments, and modified the plan for onsite parking. He needs variances for front and side-yard setbacks, density and more.

The developer would make a payment to the borough’s affordable housing fund in lieu of offering any units at subsidized rents, project attorney Chris Healey told the board via Zoom.

The project, on the northeast corner at Maple Avenue, is branded “Rivermark.”

Shamaeve’s engineer, Andrew Comi, testified that an approved 19-foot-tall retaining wall on the boundary with the library would be reduced to 10 feet, and topped with a six-foot fence.

Board engineer Ed Herrman expressed relief. “That 20-foot wall was never my favorite part of the project,” he said.

Like the previously approved plan, this one calls for the builder to plant and maintain landscaping on the library side of the property line, pending approval by the borough council.

Board member Bruce Maida repeatedly pressed Comi, and Herrman, for ways to reduce stormwater runoff to the river, just yards away at the bottom of a steep hill.

Comi said the scope of the project did not trigger extensive New Jersey stormwater management requirements. But it would funnel rainwater that now runs into Maple Avenue into an outfall pipe that empties into Maple Cove, he said.

“Once this is paved over and turf-grassed, you’re not going to see any runoff,” he said.

Seeking a “more holistic” approach, Maida suggested porous pavement for the adjoining portion of Maple Avenue, which Herrman said was unworkable because of the steep slope, and replacing asphalt with pavers, which Herrman also rejected.

“This is a bit of a challenging area,” he said. “Their obligation is to not make it worse.”

The was scheduled to continue with an in-person meeting October 7, unless an opening at an earlier session becomes available.

Developer Roger Mumford’s plan for an apartment building on Shrewsbury Avenue was rescheduled at his request to a September hearing date to be determined.