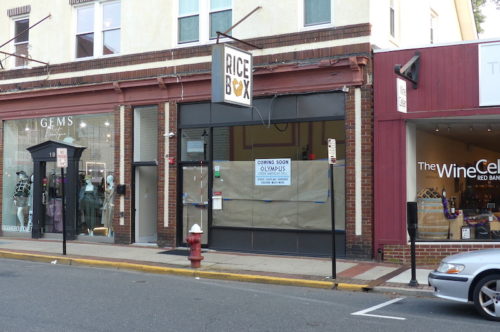 Rice Box lasted less than a year at 21 Monmouth Street, but another restaurant is preparing to replace it. (Photo by John T. Ward. Click to enlarge)

Read all about the latest signs of change in downtown Red Bank in this edition of redbankgreen‘s Retail Churn. 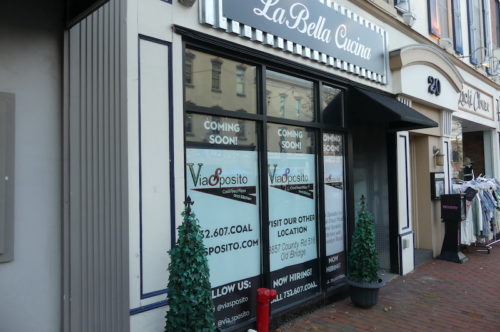 Signs at 20 Broad Street proclaim the coming of Via Sposito restaurant.  (Photo by John T. Ward. Click to enlarge.)

• Rice Box, a Thai restaurant that opened at 21 Monmouth Street last November, did not make it to a first-year anniversary. It closed in late September.

But signage has already gone up indicating a new tenant will take the space: Olympus Greek-American Grill.

The “coming soon” sign indicates the menu will include “gyros, souvlaki, burgers, chicken” and “much more.”

• Across the street, “coming soon” signage has also gone up at 28 Monmouth Street, for Sky Nutrition.

As reported here in July, a development permit indicated it would be a juice bar owned by Sara Perez Jacinto.

Love Me More clothing boutique operated there for almost two years, until earlier this year.

• Branding for the Charles Schwab investment firm has been affixed in recent days to 55 Broad Street, the classical bank building that owner  Saxum Real Estate, is rehabbing into a multi-tenant space called the Vault.

As previously reported, Schwab plans to relocate the branch that long operated at 70 White Street, at the corner of Maple Avenue, into the building.

Though the renovation is not yet complete, another tenant, Provention Bio, a biotech company working on drugs to treat autoimmune diseases, already lists the address on its website as its headquarters.

The building’s last tenant, Smith  Barney, moved out in 2012. Saxum, which also owns the building that houses the Urban Outfitters store at 2-10 Broad Street, has owned the property for almost five years.

• Designs by Mulberry, an interior design business that Sherry Promin opened last December, has departed its space at 22 Monmouth Street.

The shop has a “for rent” sign in the window.

• A pizzeria called Via Sposito plans to take over the vacant space 20 Broad Street in the heart of the downtown Broadwalk dining promenade.

Via Sposito, which has a restaurant of the same name in Old Bridge, touts itself on its website as a “coal-fired pizza and scratch kitchen with Brooklyn roots.”

The website says the Red Bank location and another in Colts Neck are “coming soon.”

The last tenant of the space was La Bella Cucina, though Churn is hard-pressed to remember ever seeing it open. Before that, it was a restaurant called Brunch, which had the misfortune of opening in in February, 2020, just before the start of the COVID-19 pandemic.

• Though its website and windows proclaim a “fall 2021” opening, Centrada Cocinia & Cocktails continues to be a hive of interior construction at 8-10 West Front Street, last home to the Downtown restaurant and nightclub.

When Churn peeked inside the doors recently, we saw lots of studwork still awaiting wallboard in what’s to be a three-story restaurant.

After many years of operation, the Downtown closed at the start of the pandemic and did not reopen.

Through limited liability companies, partners including John S. DiLeo Jr.  bought the building for $2 million and the a liquor license, price unknown, a year ago.