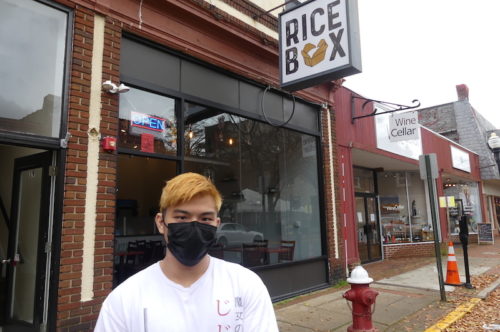 One step back and two steps forward for Red Bank’s central business district?

A Thai restaurant and a clothing boutique open next door to one another downtown, while a Broad Street business quietly calls it quits. Read all about them in this edition of redbankgreen‘s Retail Churn. 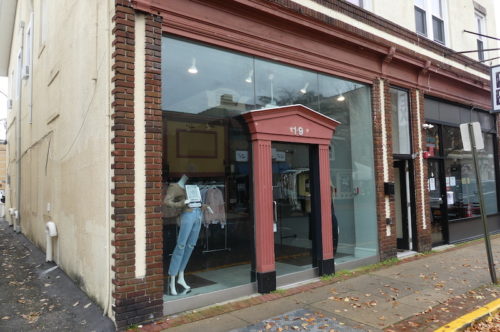 Gems Boutique has set up shop next door to Rice Box. Below, the Broad Street space occupied by Fashion Nails is now for rent.  (Photo by John T. Ward. Click to enlarge.)

Owned by brothers Mos and Khomsun Neammanee, Rice Box is “kind of like a Chipotle-inspired build-your own” meal place, but with Thai ingredients and dishes instead of Mexican. A customer chooses a base (green salad or five styles of rice); a protein, such as chicken, pork or tofu; and then a sauce, such as tamarind, honey ginger or “drunken lime.”

The “Thai Kitchen” portion of  the menu features stir-fry, pad Thai, curry and other entrees.

The Neammanees also own Bangkok Bistro in Manalapan.

• Next door, at 19 Monmouth, a clothing store called Gems Boutique has set up shop.

Or perhaps it’s more accurate to say “is setting up shop.” Churn went by three times this week and the store wasn’t open; its Instagram page say only that it’s “opening in November.”

The space previously occupied by City Barn Country Penthouse, which  had the misfortune of opening just two weeks before the pandemic prompted Governor Phil Murphy’s near-shutdown of the state economy in March. It’s now operating as an online business.

• Add Fashion Nails to the roster of Red Bank businesses lost during the pandemic.

The salon had been at 41 Broad Street since 2009, according to Debbie Eisenstein, a principal in the firm that owns the building. But it did not reopen after Murphy lifted the March ban on personal services in June, she said.