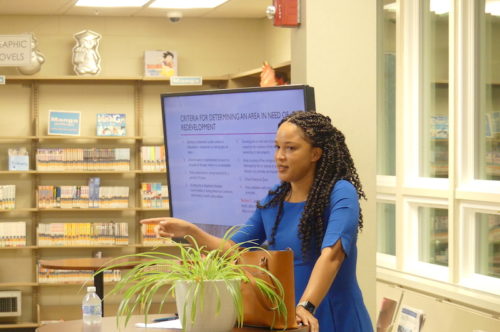 About 15 Red Bank residents got a brief seminar in municipal planning and zoning at the public library Thursday night.

But presenter Shawna Ebanks, the borough’s director of community development, steered clear of third-rail issues such as tax abatements. 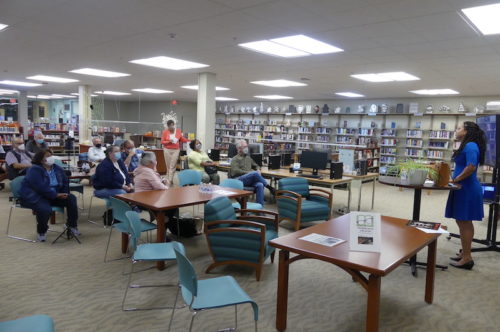 About 15 people attended the event. (Photo by John T. Ward. Click to enlarge.)

Over 80 minutes, Ebanks offered a primer on municipal land use, including the differences between planning and zoning boards; application flows and deadlines; how a Master Plan gets updated, and more.

Ebanks, an Old Bridge resident, was hired by the borough last December, filling a seat left vacant for nine months after the retirement of Glenn Carter, who held the title of director of planning and zoning.

Having pursued a zoning application on behalf of her church in her hometown, Ebanks expressed empathy for anyone who has to go through the complex process.

“It’s very hard to do,” she said. “I do feel very sympathetic to all applicants after going through the ordeal.”

Ebanks avoided discussion, however, of specific projects in the borough, including perhaps the biggest elephant in the room: Saxum Real Estate’s pending request for an area in need of redevelopment designation for 176 Riverside Avenue, the former Visiting Nurse Association property it owns.

She also left questions about the borough Redevelopment Agency matters such as tax abatements for others.

When one participant asked what can be done about developers who neglect their properties and then seek special consideration based on deterioration, Ebanks replied, “it’s an ongoing problem throughout the state… It’s unfortunate, but it is a running issue that municipalities are trying to tackle.”

The event was organized by reference librarian Mary-Ellen Mess, who raised concerns about affordable housing, and an imbalance between the number of affordable units developers are required to provide versus the number lost to demolition.

Ebanks said the borough was also contending with the expiration of deed restrictions on several affordable-housing projects built decades ago, where unit owners now want to cash out at market prices.

Mess told the audience that she hoped to have newly hired Redevelopment Agency executive director Cherron Rountree make a presentation.