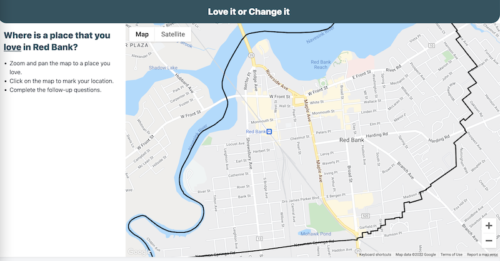 Love it? Want to change it?

Red Bank residents and visitors can now weigh in on the borough’s Master Plan update-in-progress. 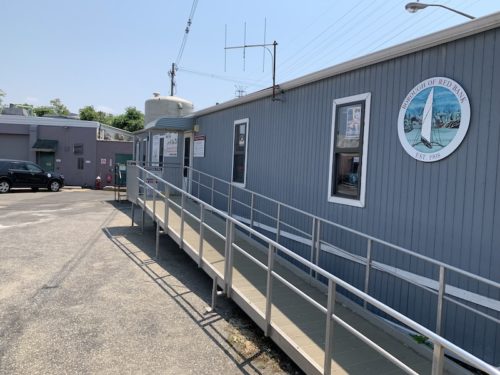 “Temporary” trailers at the public works yard on Chestnut Street have served as offices for more than two decades. (Photo by John T. Ward. Click to enlarge.)

Users can prioritize issues, such as “revitalization,” “placemaking” and “traffic,” and offer 200-character statements on how those issues impact their lives.

An interactive map on the site lets users identify places in town that they love or want to see changed, and why.

The portal can be accessed in both English and Spanish.

The debut of the tool comes as BFJ nears completion on a report about existing conditions in the borough. To be titled ‘Red Bank Today,’ the report is based in part on Zoom interviews with “stakeholder” groups, including municipal managers, board chairs and representatives of county and state agencies.

The Master Plan subcommittee – planning board Chairman Dan Mancuso; Mayor Pasquale Menna; and members Cassidy and Kristina Bonatakis – has also identified “additional priorities,” according to a BFJ summary of a March 8 meeting.

“Improvements to the DPW site are the most urgent and need to be addressed in the next few years,” the memo says. The existing site is not large enough to handle the department’s current needs” and is “not in good condition,”

The borough “has outgrown the current facility, and the systems need to be
replaced,” the summary says. “The current location is not ideal, and the Borough has explored relocating the facility. The cost to maintain/replace the HVAC and plumbing systems is very high. The Borough continues spending money to maintain the facility.”

Last May, a subcommittee of the borough’s short-lived Redevelopment Agency recommended the borough move “expeditiously” to expand and upgrade the Chestnut Street public works facility, at an estimated cost of $9.3 million.

So far, however, the council has taken no public action, and has begun a process of dissolving the agency, formed in 2019.

BFJ, which won the contract for the work in November on a $150,000 bid, plans to hold a series of public input sessions.

Here’s an overall timeline for the project, expected to be completed in December: Red Bank Master Plan timeline