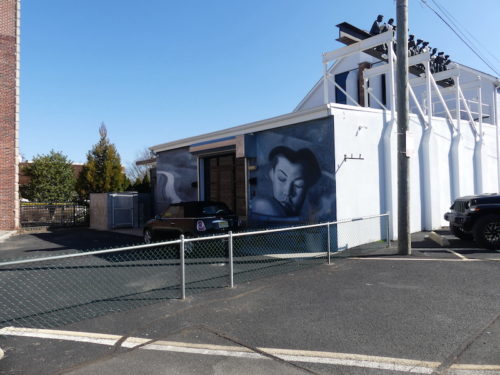 A fence erected Monday enclosed a car owned by Kenny Schwartz behind his art gallery. (Photo by John T. Ward. Click to enlarge.)

In another context, it might be seen as artistic commentary on modern existence: a car boxed in between two buildings and a chainlink fence, and no way out.

But to Red Bank art collector Kenny Schwartz, it’s no ironic statement. His car will need “wings” to escape from his gallery’s backyard after a “heavy handed” move involving a couple of real estate powerhouses, he said Monday. 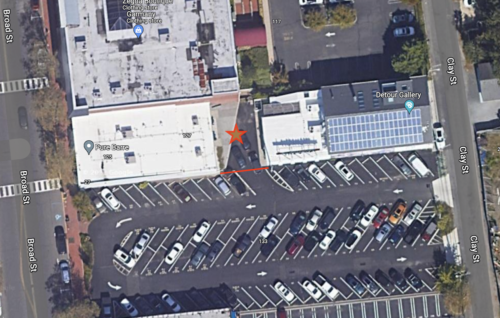 At issue is a half-acre parking lot between Broad and Clay streets that Denholtz Properties is buying from Schiff Real Property of West Long Branch, a deal redbankgreen reported on in January.

The lot adjoins Detour Gallery, built in 2016 by art collector and former auto dealer Schwartz in a former warehouse to display his vast collection of contemporary works. He lives in an apartment within the gallery.

On Monday, a three-foot-high chainlink fence was erected across the opening between his building and one that houses the Pure Barre studio at 127 Broad Street, enclosing Schwartz’s Mini Cooper.

The car is now stranded unless it “gets wings,” Schwartz told redbankgreen via email late Monday.

Schwartz largely blames Denholtz and its CEO, Steve Denholtz, who has led his firm on an unprecedented buying spree in recent years.

But Denholtz told redbankgreen his firm has not yet closed on the deal, and the fence was erected by Schiff at the urging of a title insurance company.

Seller’s representative Dan Schiff “is trying to prove that Kenny has no rights” to access his backyard via the Schiff lot, Denholtz said. “It got escalated, and maybe things happened that shouldn’t have happened, but I’m sure it’s going to resolve itself.”

Schiff did not immediately respond to a request for comment Tuesday.

The dispute has been brewing for two weeks, since Schwartz learned a fence permit had been issued by the borough. Schwartz said he contacted Community Planning Director Shawna Ebanks as well as the mayor and council to object.

Schwartz claimed the fence would prevent anyone in either his gallery or the Pure Barre studio from getting away through rear exits in the event of fire.

“The fact that we sometimes have 200 children and adults at art openings and other events is frightening to me if God forbid there was a fire in the front of my building, as there would be no way out,” Schwartz said. “How can they allow a fence that will prevent anyone from getting out and away from a fire” except by the front doors?

Under the borough’s building codes, “you get a violation if you put an electric socket in the wrong place, but this is OK?”

Interim borough Administrator Darren McConnell did not respond to an inquiry Tuesday.

The fence also prohibits Detour from using its rear loading dock to move large sculptures and paintings, Schwartz said. And not having access to the Schiff lot would impede any repairs that might be needed to the large ‘Men on a Beam‘ sculpture on Detour’s roof, he said.

Schwartz acknowledges that he “never asked for nor received any permission to drive my van or car to my rear entrance,” and “has nothing in writing” that allows him to access his back yard via the parking lot. “But no one ever said anything to me about it till now,” he said.

Schwartz said the fence went up 90 minutes after a notice of its installation was delivered to the gallery Monday morning. He was away, and the gallery manager didn’t have a key to the car to move it, he said.

Though the manager explained the situation to the fence installers, they “said they were instructed by their boss to put up fence no matter what,” Schwartz said.

Denholtz told Ebanks via email March 17 that he and Schiff were “trying to cooperate with Ken, but so far that has not worked.”

Denholtz is “agreeable,” he said, “to allowing pedestrian access across the parking lot to alleviate his fear of being ‘trapped’ in the event of a fire. But this apparently doesn’t satisfy Ken, who believes he also has a right to drive a truck across the property so he can unload his art into the building. This is where the problem is. It is nothing to do with human safety. Only Ken’s desire to obtain legal rights to create truck access across Dan’s property when he has none.”

“The emotional claim of safety has nothing to do with what is going on,” he wrote.

Denholtz told redbankgreen he’s ready to close on the deal as soon as the legal issues are squared away. Meanwhile, Denholtz said his firm is “getting close” to a development plan for the site.

As for the optics of a barricaded car, Denholtz said Schwartz “did that on purpose to make those optics. What can you do? I hand it to Kenny. He’s a good street fighter.”