RED BANK: BROADWALK GETS ANOTHER MONTH 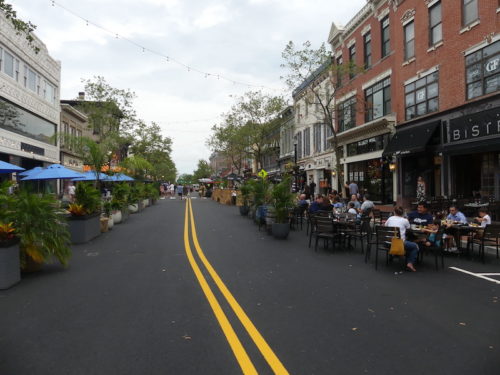 With the extension, Broadwalk is now scheduled to continue through October 2. (Photo by John T. Ward. Click to enlarge.)

Red Bank’s council unanimously approved a one-month extension of the Broadwalk plaza Thursday night. But at least three of its members weren’t happy about it.

Broadwalk, a temporary dining and shopping plaza on the northernmost blocks of Broad Street, was created in the early months of the COVID-19 pandemic. But it got a late start for its third season this summer because of an overdue a streetscape project.

When the council authorized the Broadwalk season last month, the majority opposed letting the program continue beyond Labor Day.

But the intervening weeks have included an oppressive heat wave that depressed customer turnout. Now, with more normal summer temperatures, business is finally starting to pick up, said advocates for an extension.

“It seems to be going so well,” with fitness classes and other programming, “that it would be a shame to end it on Labor Day,” said Bob Zuckerman, executive director of the downtown promotion agency Red Bank RiverCenter.

“We really got shorted this year because of the construction,” said Dominick Rizzo, a partner in Catch 19 and Centrada restaurants. “Now, we’re really hitting our stride. It looks amazing, and we have tremendous momentum.”

They had support from Mayor Pasquale Menna, who said he was “begging” for an extension through the month of October, as well as council members Kate Triggiano and Kathy Horgan.

But Councilwoman Angela Mirandi argued for restaurants to be limited to parking-space streateries five days a week, with vehicular traffic bans only on weekends. She cited fire-safety, traffic impacts on residential streets and other concerns.

Councilman Ed Zipprich, who said he “didn’t anticipate taking action” on the request because it wasn’t listed on the agenda, called the extension request “not unreasonable.” But like two of the three members of the majority faction associated with him, Mirandi and Michael Ballard, he couched his “yes” vote as one cast with reluctance. Councilwoman Jacqueline Sturdivant also voted in favor.

In 2020, Broadwalk ran from June through November. The plaza returned for a second year in May,  2021, and was originally slated to end October 1, but was granted a one-month extension.