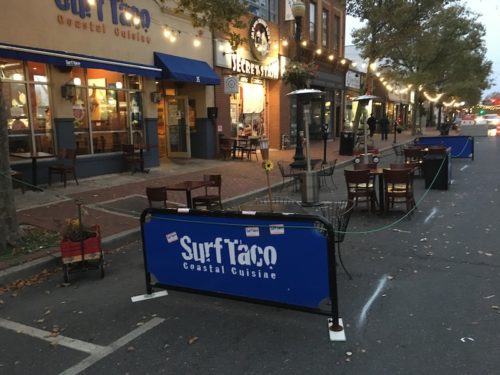 Empty tables and idle heaters on Broadwalk on a chilly Sunday evening in October. (Photo by John T. Ward. Click to enlarge.)

Red Bank’s in-street shopping and dining plaza known as ‘Broadwalk’ will go on winter hiatus at the end of November.

Borough council members informally agreed Wednesday night that the prospect of dealing with a snowstorm before winter is over makes keeping the plaza going impractical. 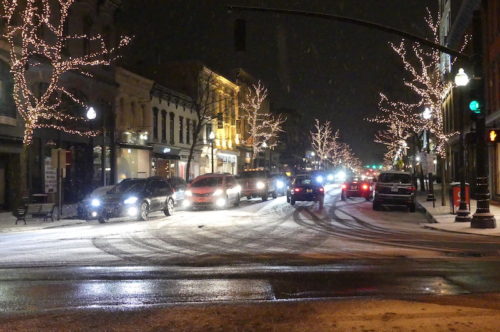 Broad Street during a January, 2020 snowfall. Below, a concrete barricade on Broad Street in late September. (Photo by John T. Ward. Click to enlarge.)

“There is a question within the business community of how we will react” to Governor Phil Murphy’s recent extension, to March, of special regulations allowing liquor establishments to serve alcohol beyond the walls of their premises, he told the council.

Based on conversations with downtown business owners, Shehady said that the continued closure of a portion of Broad Street to vehicular traffic “is probably not a good idea,” but be revisited next spring.

“We don’t know when the snow’s going to start,” or if any will come, he said. But if it falls, the borough public works department will have to move concrete barricades at Front and White streets, plow the street, and restore the barriers, without knowing what’s coming next or when, Shehady said.

“Operationally, it’ not something that is practical for us to do on and off.”

He said the borough could continue to allow restaurants to use parking stalls in front of their businesses as “streateries,” though the businesses would be responsible for clearing those enclosures of snow.

They’re already responsible for keeping the areas clean, “and they’ve been doing so,” Shehady said.

Councilman Ed Zipprich said the governor’s extension of the liquor regulations “is of some concern, during a COVID pandemic, for a lack of social distancing and a lack of mask-wearing. I just want to go on the record there.”

Clerk Pam Borghi said the borough had received only two requests so far from businesses with liquor licenses to continue serving outdoors through March, and  “both of them would be on private property.”

“I think closing the street and allowing the streateries is the way to go,” said Councilman Erik Yngstrom.

No business representatives spoke during the public comment session.

Implemented in June to help jumpstart a recovery for pandemic-ravaged restaurants and stores, the initiative has been a success, Councilman Hazim Yassin said in September.

At his urging, the council agreed then to make the plaza a seven-day-a-week, all-day affair through November.

Yassin was not present at Wednesday’s meeting.