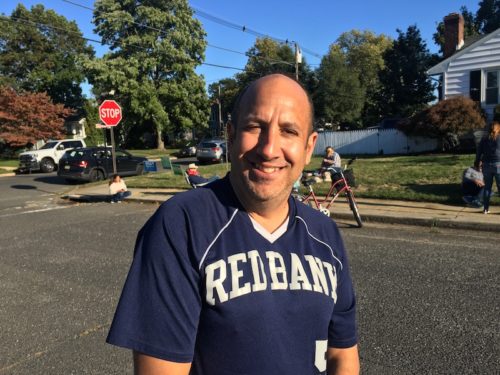 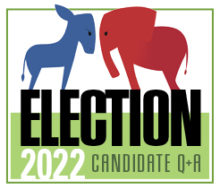 In the November 8 election, Red Bank voters will pick three members of the municipal government –  the mayor and two council members – for terms that begin January 1.

But the winners may be in office for only six months, depending on the outcome of a ballot referendum on whether to change the town’s form of government. Adoption would trigger another election in May, 2023, for mayor and all six council seats.

To learn their views of the referendum and other issues, redbankgreen recently sent a set of questions to each of the candidates: mayoral contender Billy Portman, who is running unopposed; and council candidates John Jackson, Angela Mirandi, Jonathan Maciel Penney and Mark Taylor.

Here’s what Portman had to say.

Where did you grow up? Ocean Township, NJ

Where did you go to high school? Ocean Township

If you hold college or graduate degrees, where did you earn them, and in what areas of study? I have a BA in American Literature from the George Washington University

Have you served in the military? If so, which branch and when? no

How long have you been a resident of Red Bank? 7 years

Do you own your home or rent? own

What do you do for a living? What if anything about your work makes you particularly suited to serve on the borough council?

I am a General Contractor.  I am used to delivering projects on time and on budget.  I imagine being in government will be similar to Contracting in that unforeseen problems always arise.  I will say to the residents of Red Bank the same thing I say to my clients: “Don’t judge me on the problems that arise, judge me on the solutions I come up with.”

I have been a democrat all my life and an active Democrat since 2004.  Party affiliation would be less important to me if the Republican party had not been taken over by lunatics at the National level. Having said that, I am confident I can work with anybody to do what’s best for Red Bank.

Who won the U.S. presidential election in 2020? Biden!

I just had a moment where I realized I could keep bitching and moaning about things, or I could do something about it.  I went with choice B, obviously.

In the short term, quality of life issues are paramount. Clean streets, dog poop stations, safer streets.  Long term, I am hoping many of the development issues will be addressed in the master plan update.

Do you support or oppose the November 8 referendum to change Red Bank’s government from a borough form to council-manager form, and to hold nonpartisan elections, as recommended by the Charter Study Commission? Please explain.

I whole-heartedly support it!  Non-partisan election reform will take the electoral process out of the hands of a small committee and place it back in the hands of the residents of Red Bank. And the council-manager form of government will help Red Bank run more efficiently by having a strong Administrator responsible for the day to day operations of the town.

Do you believe the council meetings in recent years have been unnecessarily rancorous? If so, what specifically should residents expect from you to address the situation?

Council meetings have definitely been unnecessarily rancorous.  I do think the change in the form of government will help by lessening opportunities for ego-driven conflict.  As for me, I believe this is where my status as a newcomer will be helpful.  I do not have a long history of conflict with anybody on the council. In general, I’m pretty even-keeled.  I’m hoping I can help set a tone for meetings that will change the tenor for the better.

Is Red Bank doing all it can to keep the municipal portion of the tax rate in check? If not, what should be done?

I am not an expert on taxes by any means, but I do hope that as more housing comes online in the next few years(in alignment with the new master plan) and as more businesses come to Red Bank, our tax burden as residents will be shared a bit wider.

Do you support the Kimley-Horn proposal for redesigning Marine Park, including the relocation of the parking lot to the former site of tennis courts?

I do, even though I am an avid tennis player and refurbished clay courts would have been amazing.

Do you agree that the former landfill at the western end of Sunset Avenue should be redeveloped as a park?

In a perfect world, yes.  I have spoken to several residents who were concerned that the site would never be able to be adequately cleaned up, but if it can be, the West side is in desperate need of parkland.

What would you do as a council member to provide more outdoor recreation for residents, particularly those who live on the West Side?

This ties in to my earlier answer about complete streets. If we can add bike paths, this would definitely provide an outlet for all residents. I also spoke to a resident who wanted the town to develop a walking path all along the river on the West side, from Westside avenue all the way up to the Senior Center.

Do you agree that the municipal public works yard needs to be rehabilitated? Absolutely.

How should the borough prioritize its needs for large capital projects, such as those identified above?

That is a really good question.  I think we need to put together our wish list first, and see what is feasible to tackle immediately, and what can be put off a few years.

Who should have the lead role in guiding those projects? The Business Administrator

Was the disbanding of the Redevelopment Agency earlier this year the right decision? Please elaborate.

Is the borough doing enough to safeguard pedestrians and bicyclists? What additional measures, if any, do you think are needed?

Should Broadwalk be permitted to return in 2023? Should it be an annually recurring feature? Should any changes be implemented?

I am a huge proponent of Broadwalk.  It should absolutely be an annually recurring feature.  I would like it to be open as long as weather permits.  And I would like to see what can be done to drive traffic to the other businesses not directly on the Broadwalk, like Signage and string lights.  It is essential that the Broadwalk is kept immaculate. We need more trashcans, especially ones that can accommodate pizza boxes. Overall, anything that drives people to visit Red Bank is a positive.

Do you believe hybrid council meetings, allowing for both in-person and remote participation, should be made a permanent feature?

Yes. The more people that can see how the government is being run, the more accountability we all have.  And I am all in favor of more people being able to participate.

Since I am running unopposed, I am probably going to be your next mayor of Red Bank.  My campaign slogan is “Change Starts now!” and if you vote yes on the referendum question, we will have a new mayor, a new inclusive and transparent way we elect our officials, and a new efficient form of government.  And let’s not forget that we are updating our master plan for the first time in over 25 years.  Change does indeed start now!

• Votes may be cast three difference ways: by mail; in-person during an early voting period described below; or in-person on election day at the polling station in the district in which the  voter is registered.

• To vote by mail, see the Monmouth County Clerk’s webpage on how to apply for and submit a mail-in ballot. Voters using vote-by-mail have the option of dropping their ballots off at any designated dropbox in Monmouth County. Red Bank has a box outside the main entrance to borough hall, at 90 Monmouth Street.

The county’s ballot-tracking system allows voters to keep tabs on the status of their mail-in ballots.

• Early, in-person voting begins Saturday, October 29, and allows registered voters to cast their ballots, on machines, for a nine-day period leading up to the election. Voters may do so at any of 10 designated polling places in Monmouth County, regardless of the municipality they call home.

• In-person, election day voting will take place at the Red Bank polling stations shown below. Polls will be open from 6 a.m. to 8 p.m. 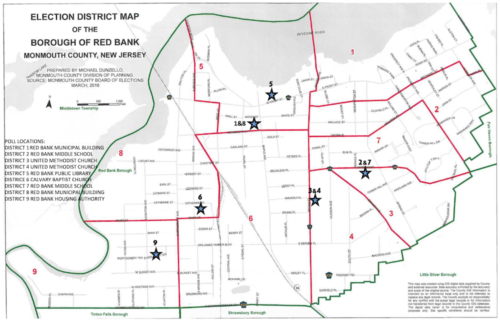