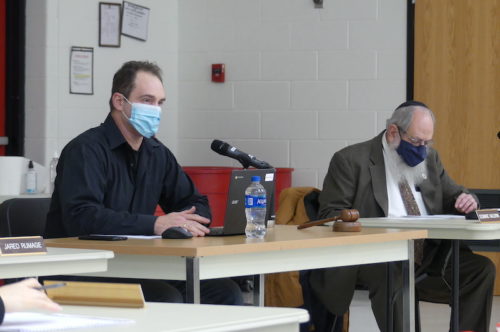 With “a huge chunk” of their staff out on pandemic-related absences, Red Bank’s public schools mustered once again to provide instruction Tuesday, Superintendent Jared Rumage said that night.

END_OF_DOCUMENT_TOKEN_TO_BE_REPLACED

Jobs and after-school programs that were cut this spring are being restored, said Superintendent Jared Rumage, seen at left with board president Fred Stone before a lobbying trip to Trenton in 2017. (Photo by John T. Ward. Click to enlarge.)

Under Governor Phil Murphy’s first budget, the borough’s 1,422-student pre-K-8 district saw a 55-percent jump in state aid, which board members said Tuesday night was a cause for both celebration and frustration.