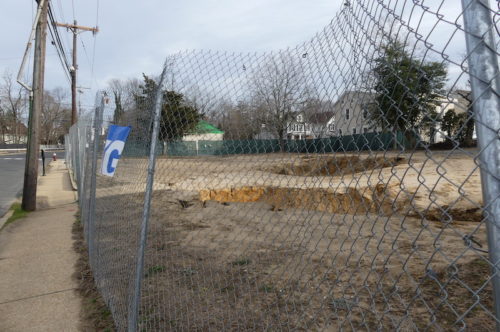 The prices of vacant lots quadrupled in less than four years when they were sold to Riverview in late December. (Photo by John T. Ward. Click to enlarge.)

Why the hospital paid a whopping price for the site remains unanswered.

END_OF_DOCUMENT_TOKEN_TO_BE_REPLACED

In posting a profit of $34.7 million in the quarter ended July 31, compared with a prior-year loss of $50.9 million, Hovnanian “recorded double-digit revenue growth and a jump in contracts, the latest sign of improvement in the housing market,” the Wall Street Journal reports.

END_OF_DOCUMENT_TOKEN_TO_BE_REPLACED

Hovnanian’s Red Bank HQ, as seen from the foot of Maple Avenue.

Hovnanian Enterprise reported a $72.7 million loss as revenue fell in latest fiscal quarter. The deficit was worse than Wall Street analysts had anticipated, according to a Bloomberg News report in the New York Times.