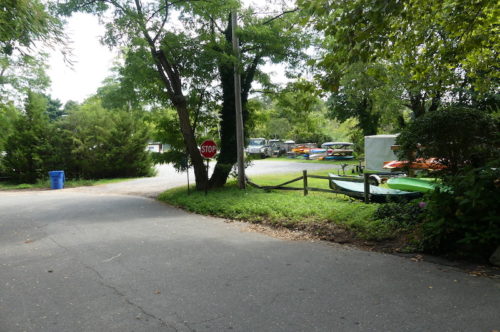 Fair Haven’s River Rats organization is not entitled to a property tax exemption, even though it’s a registered nonprofit run by volunteers, the New Jersey Tax Court ruled last week.

The organization tells redbankgreen it will appeal the decision. 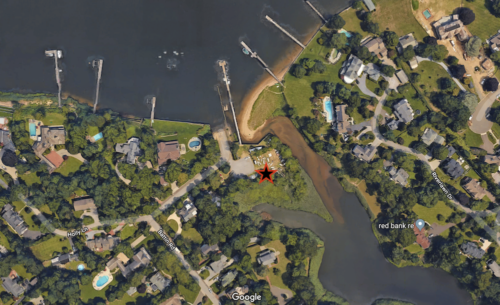 A red star indicates the organization’s property at the north end of Battin Road. (Image from Google Maps. Click to enlarge.TEXT

In an unpublished decision dated August 16, the court found that the organization’s boat-storage sheds at the north end of Battin Road, just feet from the municipal boat landing on the Navesink River, “does not meet the statutory requirements for exemption of buildings used either as a ‘school’ or for the moral and mental improvement of the public.”

Founded in 1955, River Rats is “a volunteer-run, educational non-profit organization dedicated to sailing” that has taught more than 5,000 children and adults to sail, the organization says on its website. It’s also a federally recognized 501(C)(3) organization, exempt from income taxes.

River Rats’ property consists of two lots. The larger of the two, at 1.5 acres, holds five sheds the club uses for storing boats and other gear; the other, at less than an acre, is vacant.

The case began in May, 2015, when the club sought a tax exemption from the borough. In January, 2016, the town rejected the request, on the basis that “the assessor’s inspection had revealed that the ‘buildings’ on Lot 21 were small wooden storage sheds and a platform atop cinder blocks,” according to a recitation of undisputed facts in the tax court decision.

Four months later, the Monmouth County tax board rejected an appeal by River Rats, and the organization took its case to the state tax court, arguing that the site was used for educational purposes and “for the moral and mental improvement (“MMI”) of the general public.”

The borough disagreed that the sheds had an educational purpose, and said the vacant land, by virtue of being vacant, was also not exempt.

In its decision, the tax court said the issues were “whether RRI is organized exclusively for a tax exempt purpose, whether the Property is actually being used for the same, and whether an exemption is warranted if the storage sheds are not ‘buildings’ under the applicable law.

Finding for the borough, the court ruled, in part, that River Rats was using too broad an interpretation of the word “school.”

In response to a redbankgreen request for comment, River Rats attorney Karl Buch sent this statement:

The River Rats has been a proud member of the Fair Haven community since the 1960s, where it has built deep, lifelong friendships and partnerships with local businesses, government, and the broader community.

The River Rats’ mission is simple: To teach families how to sail at an affordable price, while also enabling the public to meaningfully engage with a precious natural resource that flows through Fair Haven. To achieve this mission and ensure continuity, the River Rats relies in large part on members of the community who willingly volunteer their time.

Despite the Tax Court’s decision, we firmly believe that the River Rats—a registered charitable and educational organization exempt from federal income tax since 1961— has a valid claim for property tax exemption, which we will vigorously pursue on appeal.