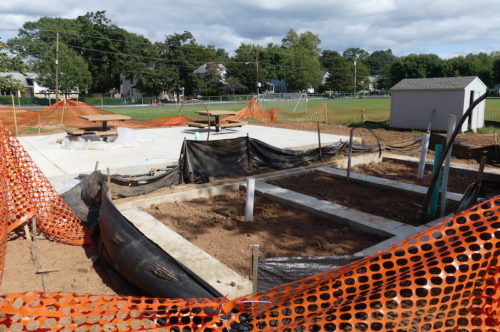 Picnic tables and pathways have been installed, but for the second time since it began in the spring, construction work at Eastside Park in Red Bank appeared to halt last month. 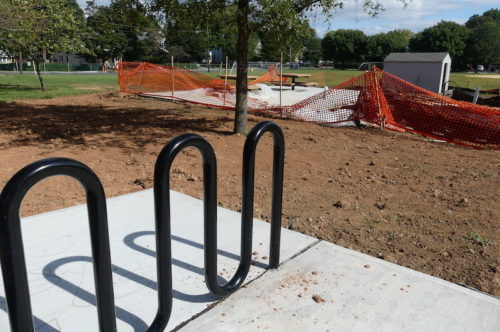 A new rack is ready for its first bicycles at the Mechanic Street end of the park. (Photos by John T. Ward. Click to enlarge.)

Ground work at the 2.3-acre park, located on Harrison Avenue between Mechanic and Marion streets, is now “substantially complete,” except for landscaping and the installation of a prefab building, borough Business Administrator Ziad Shehady said at last week’s council meeting.

The building, similar to the one in Marine Park, will provide restrooms, picnic tables and some hard-to-find shade, thanks to a large roof overhang.

Offsite construction of the building was expected to take up to 12 weeks, Shehady said. Once it’s ready, it will be installed by crane, he said.

Under a $427,325 contract awarded a year ago to GR Masonry Work LLC of Belleville, the project was to be completed by July 1. The sum also included work at Mohawk Pond, where GR completed asphalt paving of perimeter walkway and parking area in July, officials said.

But when consulting engineer Laura Neumann told the council that month that the Eastside Park portion was “outside the time frame” of the contract, Mayor Pasquale Menna directed borough Attorney Greg Cannon to send GR a letter “to let them know we’re serious” about completion.

Within days, stalled work on the site work had resumed, and no litigation was filed, Shehady told redbankgreen.