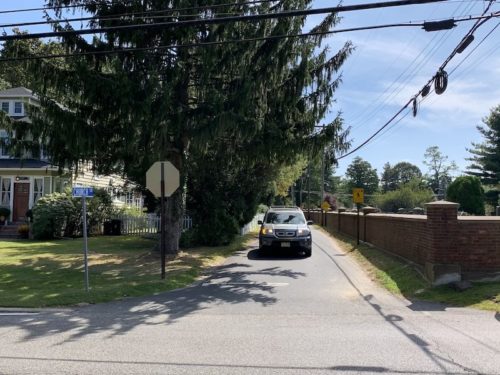 Bowing to the prevalence of giant passenger vehicles, Little Silver officials have agreed to make a short, narrow lane into a one-way. (Photo by Trish Russoniello. Click to enlarge.)

Church Lane, which runs alongside the cemetery at Embury United Methodist Church, will be turned into a one-way heading north, toward Rumson Road, the borough council decided last week.

The 323-foot-long lane, a vestige of 19th-century life in the borough, links Rumson Road and Church Street, and serves as a shortcut to and from Sickles Farm Market for many drivers. It will have a speed limit of 15 miles per hour.

Earlier this year, several residents asked for the change because of the difficulty of accommodating “humongous” cars traveling in opposite directions on the 14-foot-wide roadway.

Police Captain Gary LaBruno told the council at the time that the road is barely wide enough for a pair of behemoth SUVs to pass one another without their sideview mirrors touching.

The change wasn’t universally embraced. The owner of a home at the corner of Church Street and Church Lane said eliminating traffic in one direction would encourage speeding.

LaBruno  recommended the northerly direction of the one-way to prevent shoppers leaving Sickels from making a right turn onto Rumson Road and then a tight left into the lane.