ON THE GREEN: MEETINGS MOVE ONLINE 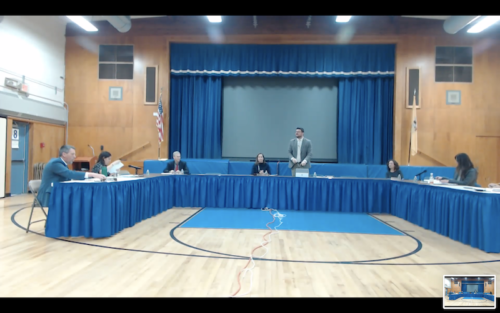 With five members seated well apart from one another in the Knollwood School gym to minimize the possible transmission of the COVID-19 virus, the board had a quorum. Four other members participated via the Zoom conferencing app. And the public, barred from appearing in person, chimed in via the chat function on YouTube, where the meeting was live-streamed.

Among the most frequent comments: “we can’t hear you.” “Overall it was a success but unfortunately, as you likely saw, we did have some technical difficulties,” Superintendent Sean McNeil told redbankgreen via email afterwards.

Everything had gone smoothly during a dry run beforehand, he said, “but then apparently our mic began to falter once we were live.”

The board held off on conducting any business until it determined that viewers could hear what was being said, which was accomplished “by moving the web cam and mic much closer to the dais,” McNeil said.

Lesson learned. Now, other districts and local government councils and boards are about to be schooled, too, as two centuries of American tradition – the ability of anyone to witness and contribute to public meetings, in person – runs head-on into the world of social-distancing necessitated by a global pandemic and an unprecedented order to ““stay-at-home.”

Red Bank, which would have had a light meeting schedule this week anyway, was still working on plans for airing its council, planning board and zoning board meetings, Business Administrator Ziad Shehady said last week.
But two town councils are scheduled to hold virtual meetings Monday night: Fair Haven and Little Silver.
Fair Haven’s meeting will be held at the offices of Forefront Technology, about a block east of borough hall, and carried live on Zoom, with no live public. Participants can access the session here. They can also participate by telephone, using one of the following call-in numbers followed by the webinar ID 771 684 511:
646 558 8656
312 626 6799
301 715 8592
346 248 7799
669 900 9128
253 215 8782

The council will not be taking a vote on the pending ordinance that would allow the borough to move ahead with a proposed $3.4 million purchase of a River Road office building as the expected site of a new borough hall and police station, Mayor Ben Lucarelli told redbankgreen last week.

“Anything where the public would likely want to be heard won’t be for at least another eight weeks,” he estimated.

“We’re heading into a new form” of public participation, he said.

Little Silver has canceled its workshop session, an intimate affair held in a conference room at borough hall. But the regular public session will be held, an hour earlier than usual, at 7 p.m., and the public will be able to participate remotely.

Those who wish to participate can do so by joining a Zoom session here, using the password: 839141. They can also do so by telephone, using one of the same call-in numbers above followed by the webinar ID 503 417 305.

The Fair Haven school board’s meeting, and the written comments it drew, are now preserved on YouTube. And the board will likely also run its April meeting on YouTube, “as we anticipate the concerns surrounding COVID-19 to unfortunately still be significant at that time,” McNeil said. “We want our folks to be able to participate while feeling safe in doing so.”
Next time around, he said, they’ll use a mic that’s hard-wired into the recording device.
Posted on March 23, 2020 at 12:15 pm, filed under Children & Teens, COVID-19 Pandemic 2020, Education, Featured, Government, Health, LITTLE SILVER, Monmouth County government, RED BANK, Schools, SHREWSBURY and tagged coronavirus, council, covid=19, Fair Haven, little silver, monmouth county, nj, public meetings, red bank, Shrewsbury, Sports, zoom. Bookmark the permalink. Follow any comments here with the RSS feed for this post. Trackbacks are closed, but you can post a comment. Email this story.
PREVIOUS: ON THE GREEN: SCENES FROM THE PANDEMIC NEXT: VIRUS UPDATE: COVID-19 DEATH TOLL RISES