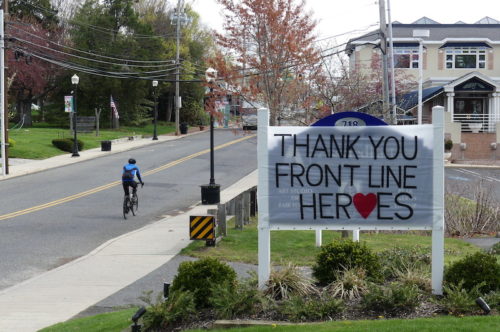 A temporary sign on River Road in Fair Haven as seen Tuesday. (Photo by John T. Ward. Click to enlarge.)

New Jersey’s loss of life from the COVID-19 soared past the 3,000 mark in recent days as another 351 residents were added to the ledger, Governor Phil Murphy reported Wednesday.

The fatalities, including more than 700 in recent days, was accompanied by evidence that “people are getting better and they are overcoming this illness,” said state health Commissioner Judy Persichilli.

The death toll in the crisis rose to 3,156, including another 22 in Monmouth County, where 167 virus fatalities have now occurred, according to the state health department’s COVID-19 online database.

The previous one-day record loss of life statewide in the pandemic was 365, reported Monday. The figures do not necessarily reflect single-day mortalities, as some reporting of deaths around the state may be delayed, administration officials caution.

The state’s hospitalized COVID-19 patient total rose by 85, to 8,270, representing a slowing rate, Persichilli said, and the number in intensive/critical care fell to 1,980, from 2,051 reported Monday.

At the same time, the number requiring lifesaving ventilators rose by 79, to 1,705, the state reported.

Speaking at his daily crisis briefing, Murphy noted that of the 71,030 residents who have tested positive for the virus, about 54,000 have done so since April 1, “which means that some 17,000 have exited” the two-week incubation period during which illness might worsen.

Some have exited by dying, he acknowledged, but “every day, there are hundreds if not thousands more who have now defeated the virus,” Murphy said.

At the same time, he continued to stress the importance of public adherence to his series of near-lockdown and separation orders aimed at slowing the spread of the virus to head off a tsunami of patients swamping the healthcare system.

Even healthcare workers need to comply, Murphy said. He said state Senator Vin Gopal had texted him a photo of hospital workers who were wearing protective masks, but not standing six or more feet apart.

“I know some of them may seem like nuisances,” he said of the directives, “but every step has been made out of sheer necessity, I assure you.”

If people begin letting down their guard, “the 36,000 worst-case hospital bed need is not out of the realm of possibility” and “no amount” of effort by healthcare officials will be adequate to meet it, Murphy said.