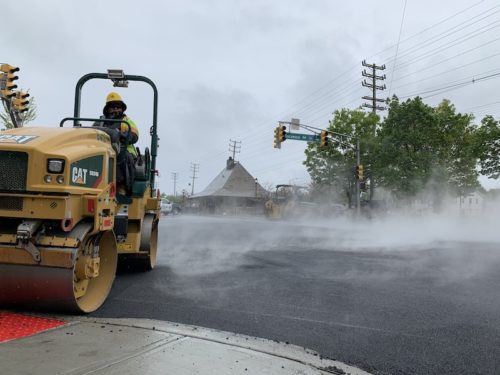 A resurfacing of Branch Avenue in Little Silver went full steam ahead Wednesday, despite the fact that it isolates several neighborhoods for hours at a time. (Click to enlarge.) 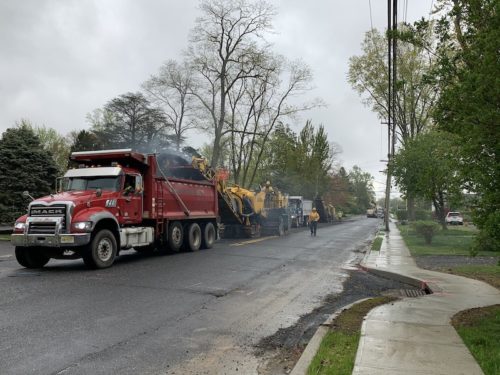 The Monmouth County project calls for milling and repaving from the borough train station (seen in top photo) to Rumson Road.

Because several neighborhoods along the route can only be accessed via Branch, local officials asked the county to do the work overnight, police Chief Dan Shaffery tells redbankgreen.

“The request was denied,” he said.

As a result, residents of those neighborhoods cannot leave or enter by vehicle for up to two hours at a time while fresh asphalt is rolled and cools at those intersections, Shaffery said.

On Wednesday, police received “some minor complaints about getting to businesses that were quickly resolved,” Shaffery said. And in the event of an emergency, “the responding emergency vehicles will cross the fresh pavement – the construction crew understands that,” he said.

According a borough police announcement, work is slated to resume at 6 a.m. Thursday and conclude 12 hours later. Motorists who have an alternative route are strongly encouraged to use it. (Click to enlarge.)

Posted on May 6, 2020 at 6:30 pm, filed under Featured, Land Use & Zoning, Real Estate, RED BANK, What's Going On Here? and tagged branch avenue, little silver, monmouth county, nj, paving. Bookmark the permalink. Follow any comments here with the RSS feed for this post. Trackbacks are closed, but you can post a comment. Email this story.
PREVIOUS: VIRUS UPDATE: COUNTY DEATHS SURPASS 400 NEXT: RED BANK: FRESH TAKE ON FOOD INSECURITY