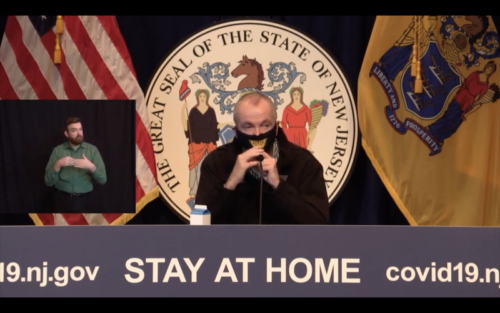 With 1,804 New Jersey residents added to the COVID-19 pandemic toll, Governor Phil Murphy wrapped up what he called “as tough a week as it relates to fatalities as we have had” in the crisis.

At the same time, “all 0f the important metrics in our hospitals continue to show positive trends,” he said at his daily briefing Saturday.

Nearly one-quarter of the 7,742 COVID-19 deaths reported since the first one March 10 have been reported since Sunday. That includes 205 more reported Saturday.

At the briefing, held in the early afternoon, Murphy said state and local law enforcement officials were monitoring parks statewide for visitor compliance with social distancing and other behaviors to help stop the spread of the disease.

Saturday was the first day parks were open in three weeks, after Murphy reversed a shutdown order issued April 8.

“Early, preliminary, anecdotal” reports indicated “so far so good,” said Murphy, who has threatened to re-close the facilities if people gather in groups or don’t wear face coverings.

Patients in intensive/critical care: 1,715, down 9

Separately, the Monmouth County freeholders reported 6,266 residents have now tested positive, with the breakdown by town below.

As of Friday, the state reported 1 more positive case at Atrium at Navesink Harbor in Red Bank, for a total 12, with 4 deaths, unchanged from Thursday; and 53 cases and 8 deaths, both unchanged, at the Hackensack Meridian at Red Bank nursing facility (formerly Chapin Hill) on Chapin Avenue.