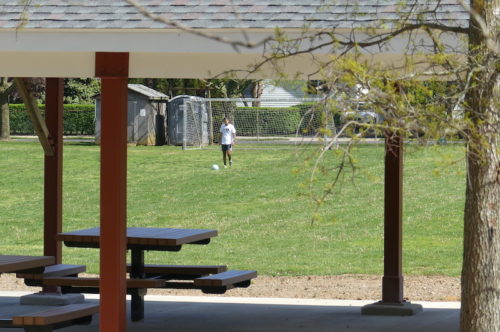 A lone man practiced soccer at Red Bank’s Eastside Park last Saturday, the day borough parks and others across the state reopened after a three-week shutdown. (Photo by John T. Ward. Click to enlarge.)

Amid a slowdown in COVID-19 fatalities statewide, Monmouth County lost 11 more residents to the pandemic, for a total of 428, the New Jersey Health Department reported Thursday.

At the same time, the death toll in the county’s longterm care facilities shot up by 39 victims, according to state data.

No immediate explanation for the disparity in figures posted on the department’s database was offered, and a health department spokeswoman did not immediately respond to a redbankgreen inquiry Thursday afternoon.

In the past, however, state officials have said the fatality data is subject to revision. The daily update also does not necessarily reflect deaths occurring from the preceding day, they stress.

Based on the latest report, 315 of Monmouth County’s 428 victims in the crisis were residents or employees of longterm care facilities, or 73.5 percent of the total.

No update was immediately available on the number of confirmed cases and fatalities by nursing home or other facility.

Statewide, 4,505 deaths in longterm care facilities have been recorded since the crisis began in early March, and the number of positive cases in those institutions “continues to grow,” rising to 24,639, Murphy said at his daily briefing on the pandemic.

Separately, the county government reported 6,662 confirmed COVID-19 cases Thursday, an increase of 104 from Wednesday. Here’s the case breakdown by municipality:

Murphy noted that about a month ago, his administration was preparing for a possible surge that might require hospitalization of some 36,000 patients. Instead, the number peaked at 8,270 three weeks ago, he said.

Now, “having fewer than 5,000 people in the hospital for COVID-19 is a milestone,” he said. “It means that the stress on capacity is lessening.”

He credited the 40-percent reduction to state residents for staying home, wearing face coverings and washing their hands.

He urged residents to “keep it up” as Mother’s Day approaches Sunday, giving moms “virtual” rather than in-person hugs.

“While we’re seeing good signs, we cannot lull ourselves into thinking all is well,” he said. “We are still in the midst of a public health emergency.”