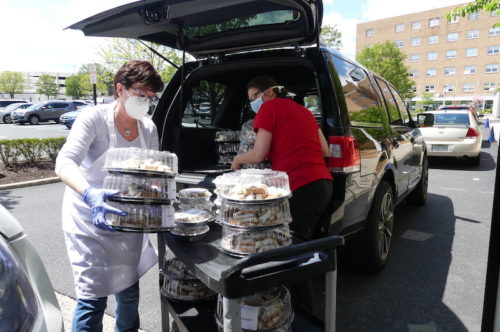 Two Red Bank restaurants delivered cartloads of meals to the nurses and other staffers at Riverview Medical Center Thursday in recognition of National Nurse Appreciation Week. 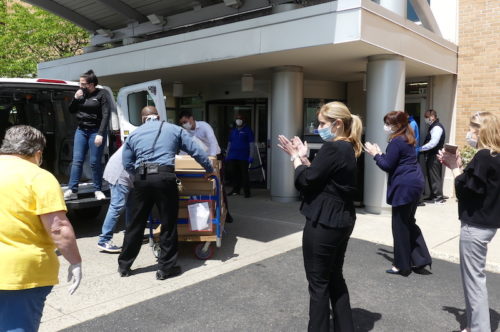 Angela Coccurello, at top, and her husband, John, owners of of New Corner restaurant on East Front Street, brought enough salad, penne vodka chicken marsala “and cannoli for dessert” to feed 500 people at lunchtime, she said.

And they planned to  and planned to return later with 250 more servings for the night shift.

The Coccurellos donated the food with an assist from their vendors: Rooney Produce, Roma Foods, Ferro Foods and Bindi Desserts. “I had everybody pitch in,” she said.

“With the COVID, they’re working very hard,” Angela said of the hospital workers. She and her husband wanted to say “thank you” to people who have also been their customers for 35 years, she said.

Just moments before the Coccurellos arrived, two employees of Patrizia’s on Broad Street delivered 30 meals donated by FLAG Red Bank to the hospital.

More fully known as the Front Line Appreciation Group, the organization links individual donors and Red Bank restaurants to feed staffers in the emergency and intensive care units at Riverview  and Monmouth Medical Center in Long Branch, as well other first responders in Red Bank.

To donate or learn more, visit FLAG Red Bank’s Gofundme page. Information about the origins of FLAG can be found here.