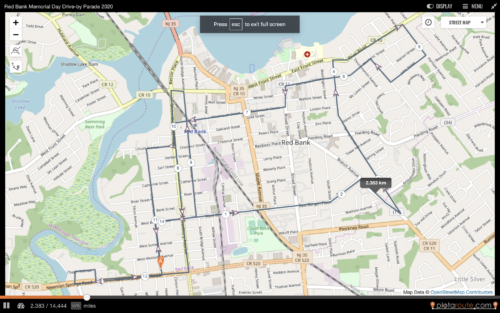 One year after a long-lost tradition was revived, this year’s Red Bank Memorial Day parade will be a scaled-down, drive-by affair.

Whereas last year there were tons of marchers, bands, antique cars and horses, this year’s edition features a fire truck, a police vehicle “and a couple of motorcycles,” said Parks & Rec Director Charlie Hoffmann.

And like the Easter Bunny parade in April, this one will come to residents. They’re asked to remain in front of their homes (or go to a nearby viewing place) while practicing social distancing.

“We appreciate the brave men and women who have paid the ultimate sacrifice for our freedom. We are happy to show our respect to these individuals in this small way on Monday,” Hoffmann said in an email. “Although it will be different from our usual parade and ceremony, their memories will be in our thoughts.”

The parade will kick off from Westside Hose Company firehouse on Leighton Avenue at 12 noon Monday, Hoffmann said, and cover many but not all borough streets over the course of about an hour.

Separately, the volunteer fire department will hold a memorial service at 10 a.m. at the firefighter’s statue in front of borough hall, with a limited number of designated attendees representing the town’s fire companies and first aid squad

The customary borough Memorial Day service at the Veterans Monument on Monmouth Street has been cancelled.

Posted on May 22, 2020 at 3:10 pm, filed under Children, Events, Featured, Government, History, Misc. Events, RED BANK, World Affairs and tagged 2019, memorial day, nj, parade, red bank. Bookmark the permalink. Follow any comments here with the RSS feed for this post. Trackbacks are closed, but you can post a comment. Email this story.
PREVIOUS: VIRUS UPDATE: FACILITY CASELOAD UP BY 11 NEXT: RED BANK: QUICK PARADE, SMALL DELIGHTS