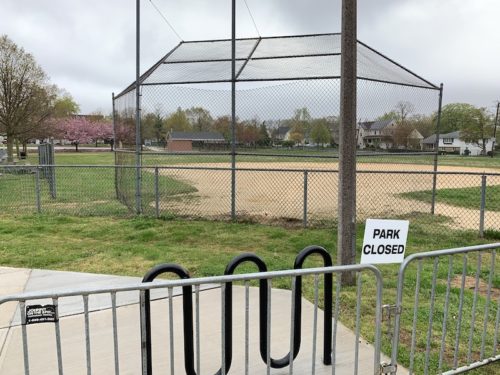 Barricades around Eastside Park, seen here on Thursday, had been removed by Friday morning. (Click to enlarge.)

Following a three-week closure of state and county parks ordered by Governor Phil Murphy to slow the spread of COVID-19, Murphy announced on Wednesday that he was lifting the order, effective Saturday.

Red Bank, which had followed Murphy’s order with a shutdown of borough parks on April 9, also followed his lead in declaring an end to the closures.

The unprecedented move was based on “recent instances of non-compliance with social distancing directives at local parks despite verbal warnings and orders to disperse,” according to a notice posted on the town’s website.

During a seven-minute special council meeting Friday afternoon to extend the deadline for property tax payments, Councilman Ed Zipprich asked what provisions were being made in anticipation of the public return to the parks on Saturday.

“I just want to make sure we’ll have some type of enforcement, as I know the weather’s going to be beautiful this weekend, and everybody has been sick of looking at the rain for almost the entire month of April,” he said.

Because the town has “limited resources,” Menna said it was largely relying on the public to both comply and report concerns to the police, so they can “assess those needs as they come in.”

In addition, any public utility employees in the parks “will do their best to educate the public” about social distancing, he said.

Afterward, police Chief Darren McConnell told redbankgreen the department plans to do “frequent walking patrols” in the parks over the weekend.

“Anything in violation of the order will be dispersed,” he said via text. Groups of 10 or more people in close proximity are prohibited, as are team and contact sports, he said.

Basketball and tennis courts as well as playgrounds and restrooms will remain closed, McConnell said.

Menna implored the public, “whether you feel you’re perfectly healthy or not, if you’re out in Red Bank, please, please please wear a mask.”

Menna was hospitalized last month “as a precaution” over concerns about COVID-19-like symptoms and other health issues, and afterward spent two weeks isolated at home.