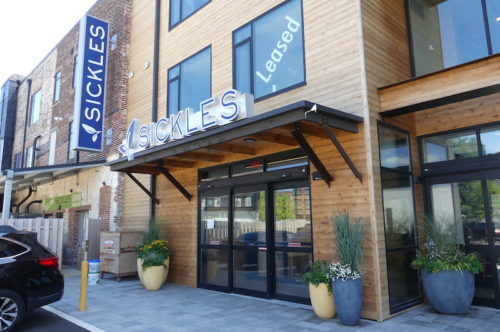 The north entrance of the new Sickles Market, above, and below, a rendering of the shipping container retail project planned for the site. (Photo by John T. Ward. Click to enlarge)

“Whenever I finish one of these, I always feel like it’s a just a pause in the evolution” of a property, said Cole, partner in the Metrovation development firm. “Because we’re constantly working on whatever we do.”

For example, the Grove at Shrewsbury, which Metrovation also built and owns. “I’m working on the next three years there – how we are we going to continue to evolve and keep it interesting for our customers,” he said.

As Cole spoke, a small crew was creating a green wall of plants steps away in the Anderson building’s lobby, part of a new addition that features timbers recovered from the onetime home of the Seattle Times.

The entryway separates the new Sickles Market, which hosts a Booskerdoo coffee and baked goods stand inside, and Bottles by Sickles, a liquor shop opened in October. It is space that can be used by customers of Booskerdoo and Sickles to hang out with a sandwich or coffee, Cole said.

But if the latest milestones are something of an anticlimax for Cole, they’re something else for Glen Goldbaum, who’s planning to move his Lambs & Wolves salon and art gallery from Bridge Avenue to the second floor of the Anderson building.

Over the past 12 years, Goldbaum has seen the area undergo significant transformation, including construction of the Station Place apartments on Monmouth and Oakland streets, and Metrovation’s own West Side Lofts, a 91-unit apartment building at Bridge Avenue and West Front Street.

Now under construction just a block away is Denholtz Properties’ Rail development, which will bring 57 new apartments and retail space to a site that abuts the train station.

“After all we’ve been through to get to this point, this feels like hope,” Goldbaum said of the Anderson project.

A red brick fortress constructed at the corner of Monmouth Street and Bridge Avenue in 1909, the Anderson warehouse had been vacant for an estimated 25 years by the time Cole acquired it for Metrovation in late 2006. Its roof had begun to collapse.

What attracted him? “I just liked the charm of it,” said Cole, a 54-year-old Fair Haven resident. “There’s always a feel to these things, and I thought we could do something interesting with it.”

What that “something” might be, however, took years and several detours to be realized.

Before Metrovation came along, restaurateur Adam Rechnitz, owner of the Triumph Brewing Company in Princeton, and his now-deceased father, Two River Theater founder Bob Rechnitz, envisioned combining their creations in the Anderson site, which they and other family members acquired under the name Gemini Group in 1997.

In 2002, after Gemini acquired the former Blaisdell Lumber property on the opposite side of Bridge Avenue as the future home for the theater, Triumph proposed a three-floor, 360-seat microbrewery for the Anderson site, under plans that went before the borough planning board.

But Triumph eventually chose to open in Metrovation’s West Side Lofts project, also on the Blaisdell site.

Metrovation’s first run at transforming the 27,000-square-foot Anderson structure called for 23 residential units above two street-level stores, which won board approval in 2006. But the firm abandoned that plan in 2012, citing poor economic conditions following the global credit crisis.

Four years later, Metrovation went back to the board with plans for a four-story addition and other changes to nearly double the size of the structure, with retail space on the ground floor and offices above.

Cole told redbankgreen last week that he had been looking to land a single retail tenant, and “decided one day to pick up the phone and call” Sickles owner Bob Sickles, who was receptive to the idea.

“Little by little we got more comfortable with it,” Cole said, and the deal was announced in April, 2016.

It’s still not full. There’s a breathtaking 6,000-square-foot third-floor space in the original part of the building that remains vacant, though talks with a possible tenant are underway, said Cole.

The final piece? Shipping containers, to be stacked on an island in the parking lot and used to incubate business that might someday grow up, move out and be replaced by another startup, Cole said.

While no tenants are yet lined up, “there’s a lot of people working out of their homes doing drop-off who have approached us,” he said. The idea is “get them stabilized” as retail operations and then give them a gentle nudge out of the nest.

The containers are expected to debut in the spring of 2021, he said.

Goldbaum, who used the Anderson building for photo shoots when it was vacant, said Cole successfully maintained the integrity of the structure.

“You wouldn’t know what’s old and what’s new in here,” he said.

Cole, characteristically, is reluctant to describe his creation as singularly transformative to the immediate area, which is also home to the Galleria at Red Bank, a former uniform factory converted to stores and offices in the 1990s.

“I see it as evolution, rather than one big change,” Cole said. “We’re just one contribution to it.”

If you value the news coverage redbankgreen provides, please become a paying member. Click here for details about our new, free newsletter and membership information.