ON THE GREEN: EARTHQUAKE SHAKES REGION 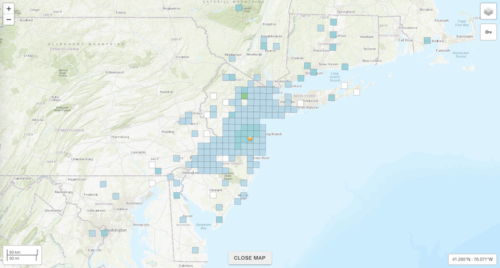 No damage is known to have occurred in and around Red Bank. But the temblor lit up social media. Employees of Smith Barney mill outside their Broad Street office following an earthquake on August 23, 2011. (Photo by John T. Ward. Click to enlarge)

The United States Geological Service confirmed a magnitude 3.1 quake southeast of Freehold at a depth of about 1.5 miles at 2 a.m.

On  the website Earthquake Report, an unidentified commenter from Red Bank wrote he or she felt “a loud rumbling sound for 4-5 seconds” and then felt the ground “shaking slightly back and forth.”

Reports on the site originated as far away as Brooklyn, Princeton and Brick Township.

Moderately damaging earthquakes strike somewhere in the New York to Wilmington urban corridor “roughly twice a century, and smaller earthquakes are felt roughly every 2-3 years,” according to the USGS.

A magnitude 5.9 earthquake centered in Virginia shook the Red Bank area on the afternoon of August 23, 2011 but caused no damage.

Posted on September 9, 2020 at 8:30 am, filed under Featured, History, Nature, RED BANK and tagged earthquake, freehold, nj, red bank. Bookmark the permalink. Follow any comments here with the RSS feed for this post. Trackbacks are closed, but you can post a comment. Email this story.
PREVIOUS: LITTLE SILVER: RBR REOPENING DELAYED NEXT: RED BANK: BIKING LANDSCAPER NEEDS WHEELS