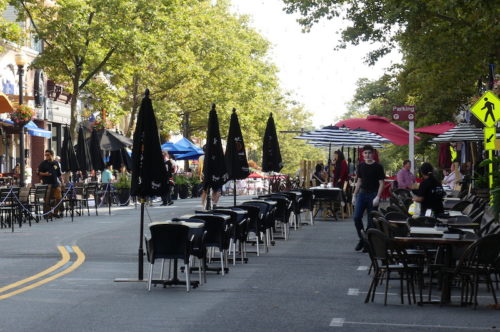 Red Bank’s ‘Broadwalk’ experiment with in-street dining on Broad Street is going 24/7 for at least the next two months.

The change, from a four-day-a-week schedule, goes into effect Thursday, following a  surprise proposal at Wednesday night’s council meeting. 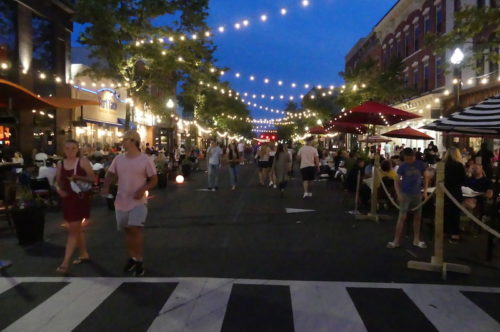 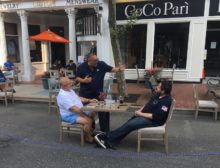 Implemented June 19 to jumpstart a recovery for pandemic-ravaged restaurants and stores, the original plan closed Broad Street to vehicular traffic on Thursday, Friday and Saturdays from 3 p.m to 10 p.m.
The eastern end of Monmouth Street was closed to vehicles on Sundays, but that part of the program was ended after several weeks as unsuccessful.
Set to end November 30 with the sunset on a temporary loosening of alcohol laws by Governor Phil Murphy, the Broadwalk initiative has been a success, Councilman Hazim Yassin said during the council’s session Wednesday, conducted via Zoom.
Without advance notice on the meeting agenda, Yassin proposed the council make the plaza a seven-day-a-week, all-day affair, effective immediately.
“I think now would be a good time to do it on a kind of trial basis,” Yassin said.
“With only two months left and the colder weather, I think now is a good time to give businesses who’ve been benefitting greatly from what we’ve done more of a chance to make the difference up,” he said.
Mayor Pasquale Menna endorsed the change. He said he has always seen the recovery effort as an “ambulatory” process, subject to change based on feedback.
Yassin’s proposal “makes sense, but we should be smart enough to act accordingly if it doesn’t work,” Menna said. “Ultimately, the market will dictate what we do.”
Yassin said the impact would be monitored weekly for possible changes.
Councilman Michael Ballard, however, objected that the public had no advance notice of the change.
“I don’t think it’s fair that this was just thrown on the agenda,” he said. Residents “may have been here” had they known it would be discussed, he said.
Councilwoman Kathy Horgan responded that residents “will have opportunity” to weigh in.
Laura Kirkpatrick, who heads downtown promotion agency Red Bank RiverCenter, applauded the move as beneficial to merchants.
“The voices in the Broadwalk zone have been heard,” she said.
Information on when the shutdown would be implemented was not immediately available. Under the prior authorization, the street closure would begin Thursday afternoon, with large concrete barriers moved to block vehicles at Wallace Street and Front Street.