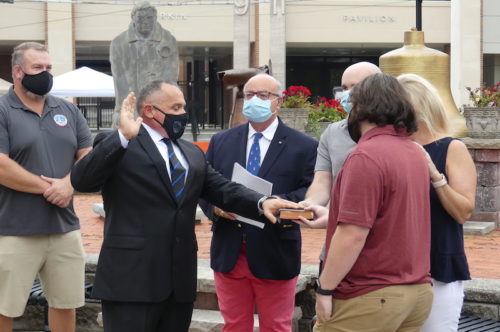 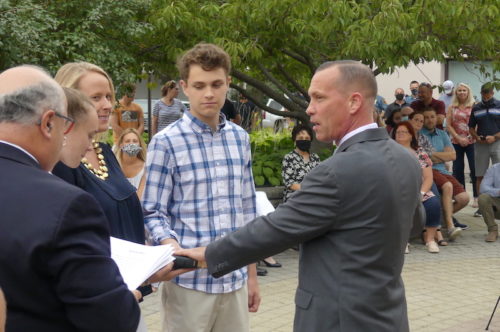 Robert Campanella swears the oath of office as lieutenant as his wife and children look on. (Photos by John T. Ward. Click to enlarge.)

As previously reported, those who moved up the command line were Errico Vescio, to captain; Beau Broadley and Robert Campanella, to lieutenant; and James DePonte, Garrett Falco and George Travostino, to sergeant.

Addressing the gathering following the ceremonies, Councilwoman Kate Triggiano noted the current air of conflict in cities elsewhere over policing.

“The conversation that I’ve had lately with people in the community is, ‘why haven’t we heard lots of complaints about Red Bank?  What’s going on there?'” said Triggiano, who serves as police commissioner. “And that’s because you do a great job, full stop.

“We host a lot of activism here, we host a lot of events here, and people leave them saying we have the kindest, most caring police department in the area,” she said.

Also noting the environment elsewhere, McConnell told the gathering that Red Bank police are “extremely lucky to work where we are, when we look around us and see what it could be like, which is a credit to all of you.”

The six cops had been eligible for promotions earlier in the year, but with the onset of the pandemic, agreed to postpone their promotions and accept pay freezes, which helped saved the town $100,000, said McConnell. He thanked them for their “patience and understanding.”

McConnell told redbankgreen the officers won’t be compensated for the money they would otherwise have been paid over the past six months. “But  there hasn’t been a peep of complaint,” he said.