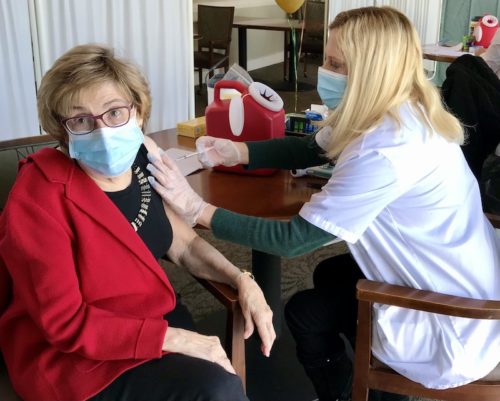 The grim milestone was passed as a Red Bank senior facility reported three more pandemic-related fatalities, though all three victims were considered to have recovered from the virus, a representative said.

“These individuals had been diagnosed with and recovered from COVID, then subsequently passed away,” Zauner said by email. “The Atrium strictly follows the reporting requirements from the state of New Jersey, whereby any resident who ever tested positive and then expired is counted as a COVID death although they may not be COVID positive at the time of death.”

The Atrium, which offers independent-living apartments as well as onsite skilled nursing care for its senior clients, has now had 14 resident deaths in its longterm care operation since late November. [A previously reported total of 13 deaths was later revised down by two to correct a reporting error, Zauner said.]

Also on Friday, 220 residents and staff members at the Atrium received a COVID-19 vaccine from the pharmacy giant CVS, Zauner said. With that, 79 percent of the Atrium’s residents, in both its assisted living and skilled nursing components, have now received at least one of the two shots, she said.

“Any individual who has symptoms or tested positive for COVID cannot receive the shot, which accounts for the portion of the resident population not yet vaccinated,” she said.

Since the start of an outbreak, which the state defines as one or more positive tests in a 28-day period, 29 Atrium residents and 32 staffers have had tested positive for the coronavirus, the state reported its update on longterm care facilities Monday.

At Red Bank’s only other longterm care facility, the Hackensack Meridian Health center on Chapin Avenue, 8 residents and 12 staffers have tested positive in a current outbreak, with no recent deaths associated with the pandemic, the report showed.

• In his regular Monday briefing on the pandemic, Governor Phil Murphy reported that more than one million COVID-19 vaccines have now been administered since the first one on December 15.

More than half the shots have been given in the past 16 days, which Murphy said was “definitely forward progress” in his campaign to inoculate 4.7 million adults statewide by July 4.

In Monmouth County, 78,104 vaccine doses had been given, the website indicates, 61,690 of them first doses.

• The state’s COVID-19 dashboard showed that Monmouth County has now lost 1,200 residents in the pandemic, which first took hold in America 11 months ago.

Of those, 263, or more than one in five, have been reported since January 1, according to state data.

In Monmouth County, 78,104 vaccine doses had been given, the website indicates, 61,690 of them first doses.