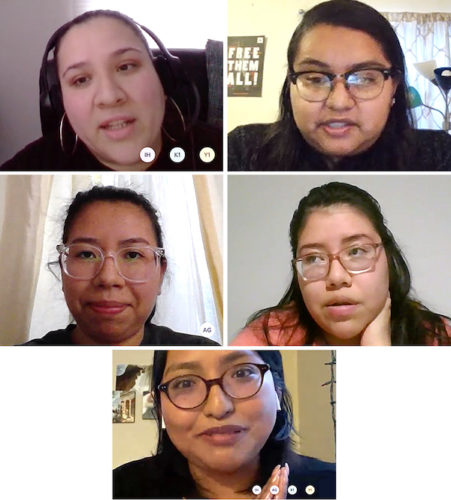 As it became clearer in the weeks after the November 3 election that Joe Biden would become the 46th president of the United States, Adriana Medina Gomez‘s phone began ringing more than usual.

“Among our clients, there was a sense of, ‘OK, Biden won, now what? What can I do to get legal?'” said Medina Gomez, a legal assistant in the Red Bank office of the American Friends Service Committee, a Quaker social justice organization. “Like immediately, the calls started pouring in about that.” 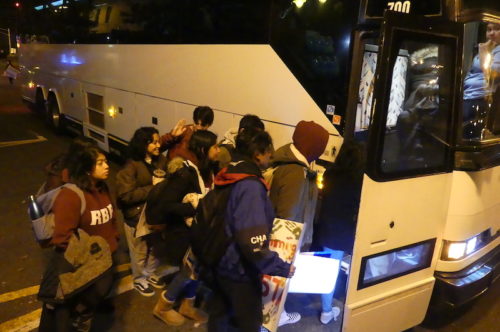 Immigrant-rights activists boarding a bus in Red Bank for a protest in Washington in November, 2019. Below, Itzel Perez Hernandez addressing a Red Bank rally that year. (Photos by John T. Ward. Click to enlarge.)

She had to tell the callers that nothing could be done right away, Medina Gomez said.

“It’s going take time for things to change,” she said. Even with a new administration taking hold January 20, “we’re still on the tail end of a lot of the policies the Trump administration put in place.”

That means arrests by the Immigration and Customs Enforcement can still occur. Medina Gomez estimates the agency is holding more than 100 Red Bank area immigrants behind bars, and “there’s not a change that would all of a sudden have all these people released immediately,” Medina Gomez said.

redbankgreen spoke last week with Medina Gomez and four other Red Bank immigrant-rights activists for a temperature check as the Biden Administration began settling in.

Also on the web call were Itzel Perez Hernandez, an AFSC organizer; Karina España; Karla Ortega and her sister, Yaritza Ortega. All have been involved in pressing for immigrant rights; all are Red Bank residents except Medina Gomez, a former borough resident who now lives in Neptune.

For some of the five women, so-called Dreamers who came to the United States as children, the change in administration has provided emotional and psychological relief.

“On a personal level, I feel like I breathe easier, definitely,” said Medina Gomez. “I’ve been losing a lot of sleep over the last four years. You were stuck. It didn’t matter how much you talked about it, it didn’t matter who you spoke about it to. There was this weight of uncertainty and fear, every day,” she said.

Now, she said, “I feel like I can finally sleep.”

With the new administration in place, “we do get to take a deep breath and say, ‘the fights that we’re fighting now feel more rational fights,’ because that’s a fact,” said Perez Hernandez. “We’re dealing with an administration that didn’t come out of the gate and call millions of people rapists and criminals. I’m glad about that, as somebody who cares about facts, that I get to have rational conversations, rather than reactions to tweets that are not policy.”

But the relief is tempered by varying measures of hope and fear, the women said. For España, the election “was the lesser of two evils, to be honest,” she said.

“It’s not like it’s going to get fixed quickly, but it’s been like 20 years that we haven’t had a pathway to citizenship, so I can only hope for the best at this point,” she said.

“I definitely feel more safe now,” said Karla Ortega, a Brookdale Community College student who works as a volunteer interpreter in the Red Bank Police Department. But she recalls that “we saw nothing passed” when Democrats last controlled both houses of Congress and the White House during the first  years of the Obama administration. And afterward, deportations soared.

“The fear is a little bit less, but the government still has our information whenever they want to come for us,” she said, referring to personal details provided under the Deferred Action for Childhood Arrivals program, or DACA. “They know where to find us.”

Yartiza said she also worries about her mother, an undocumented immigrant in her early 40s who speaks no English and has a serious health issue, and her American-born five-year-old brother.

“We’re definitely hopeful, but we’re just starting to look and see what’s to come,” she said.

In its first two weeks, the Biden administration has reversed Trump’s so-called Muslim ban; halted border-wall building; created a task force to try to reunify family members separated at the border; and said it would send a citizenship bill to Congress. So far, however, most of his attention has been on “eliminating bad policy” rather than creating new ones, Biden said this week.

Meantime, other threats remain, including a court challenge to DACA. Created via executive order by Obama in 2012, the program offered some 800,000 immigrants who came to the United States as undocumented minors two years of protection from immediate deportation. It also gave them access to Social Security cards and driver’s license, permits to work here legally, and required them to renew their status every two years.

Still, another case, pending in federal court in Texas, challenges the legality of DACA’s inception. An adverse ruling would affect a “significant number” of Red Bank residents, many well into adulthood, Perez Hernandez has said.

She said she worries about all of America’s undocumented immigrants, no matter their age or how long they’ve been here, “and to me, the job is never going to be done until we get full reform for 11 million people…

“The day that I have citizenship papers in my hand, and so does the rest of my community, that’s the day I get to say, ‘it’s been a good ride, and I’m done,'” she said.

But many members of the immigrant community are clearly of the belief that “it’s night and day: if I’m a law-abiding person and pay my taxes, they’re not going to come find me in the middle of the night, which is definitely not how they felt during the Trump administration,” said Perez Hernandez,

She believes too many are wearing “rose-colored glasses” about the Biden presidency, she said, “and that’s kind of a double-edged sword for someone like me, whose job it is to inform them. I am glad that people feel this president isn’t going to persecute us, because that’s what it feels like… but unfortunately it is my job to tamper down expectations. That if we are going to see a citizenship bill that they want just as much I want, then we must show up” to be heard, she said.

What signs are the women looking for?

But Biden needs to go beyond that, and offer protection and a route to citizenship for immigrants who don’t fit what Perez Hernandez calls “the acceptable narrative,” she said.

“I would give a surprising amount of credit if they put forth something that included people who are not ‘the ideal immigrant,’ the ones who didn’t go to Harvard,” she said. “My mom’s not going to become a doctor, ever, but she is my mother and she is worthy of protection.”