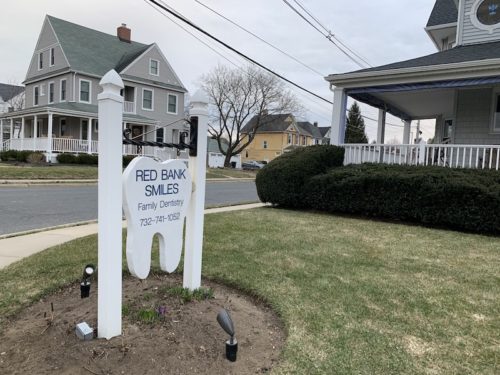 The tooth-shaped sign is used as a reference by locals when giving out driving directions. (Photo by John T. Ward. Click to enlarge.)

In less than half the time recommended for a good brushing, Red Bank’s Historic Preservation Commission OK’d the replacement of a dentist’s tooth-shaped sign Wednesday night.

“We love the tooth,” said Chairwoman Michaela Ferrigine, convening the hearing without anyone from Red Bank Smiles chiming in on the Zoom call. “We just want to make sure the tooth is reinstated. If we didn’t have the tooth, I don’t think people could find my house.”

In fact, many locals use the molar-shaped marker, at the corner of River Road and Prospect Avenue, as a reference when giving out driving directions. At least three members of the commission live within a few hundred feet of the sign.

“That tooth has been there 50 years, I think,” said member Barbara Boas.

Satisfied that the request called for a simple replacement, the commission gave unanimous approval in just over 60 seconds. (The American Dental Association recommends people spend two minutes brushing their teeth, twice a day.)

All other applications on the HPC agenda also won approval:

• A garage-style door for 26 West on the Navesink, with the restaurant agreeing to pain the metal structure in one or more colors to match those on the building’s facade.

• Signage for Alpha Fit, the gym that’s moving into the former Atlantic Glass shop at Maple Avenue and White Street.

•  Paint color for Trinity Episcopal Church, at 65 West Front Street. The color will match the existing hue on the older part of the structure, which dates to the late 1800s, a contractor told the board.