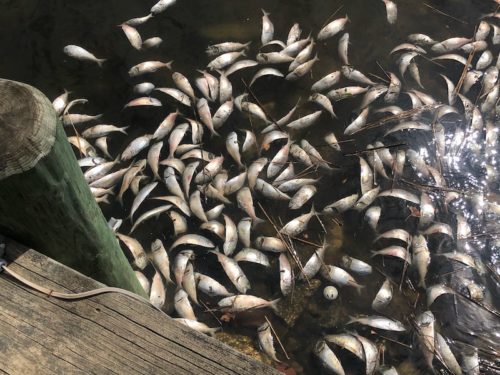 A massive fish kill in the Navesink and Shrewsbury rivers in recent weeks is “the most severe mortality event in recent memory,” but New Jersey environmental officials still don’t know why it’s targeting only one species, Clean Ocean Action reported Thursday.

The environmental advocacy group also pressed the state to remove at least some of the dead fish from Red Bank-area waters.

Following up on an April 19 meeting with state Department of Environmental Protection personnel that executive director Cindy Zipf and staff scientist Swarna Muthukrishnan requested last week, COA’s website reported that officials “confirmed fish bacteria Vibrio anguillarum as the cause for this menhaden (aka bunker) die-off.”

“NJDEP has been monitoring these die-offs for years, but this is the most severe mortality event in recent memory,” the Thursday afternoon update said. “This on-going event is also particularly notable because it is caused by a bacterial infection and occurred in colder months (fall/winter), which is atypical.”

The bacterium lives in saltwater, but the fish die-off appears to be limited to menhaden, though “it is unclear why, or if other species could be affected,” COA said. “NJDEP suggested that menhaden may be more susceptible due to their schooling pattern of large numbers, in addition to being abundant.”

Other takeaways from the meeting, according to COA:

COA said that while it applauds the DEP for providing a “swift and detailed briefing,” it again called on the agency and the state Department of Health to host a virtual public forum to update citizens and provide a means for questions and answers.