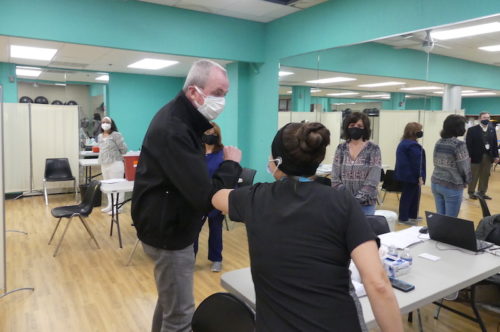 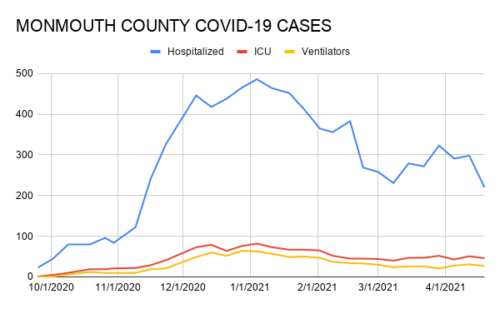 Hospitalizations in Monmouth County have declined again in the past two weeks. Below, cumulative cases in Red Bank, Fair Haven and Little Silver. (redbankgreen chart from Monmouth County data. Click to enlarge.)

• As of Monday morning, 2,507,736 New Jersey residents were fully vaccinated against the coronavirus, and another 3.8 million have received the first dose of a two-shot regimen, Murphy said at a briefing.

The state is now more than halfway to its goal of inoculating 4.7 million by the end of June, he said.

“For my tastes, at least, it’s too early to declare victory” against the pandemic, Murphy said. But with data on new hospitalizations, ventilator usage and other indicators combined with vaccination totals and warming weather, “that’s all cause for quiet, cautious optimism,” he said.

“It’s been a whirlwind,” Rinn told redbankgreen after he led Murphy on a tour of the vaccination center at the Red Bank YMCA Friday afternoon. “When we first started here, we didn’t know what was going to happen.” He credited YMCA president and CEO Laurie Goganzer with “immediately” offering up the facility as a distribution point, expanding on its role since May as a COVID-19 testing facility.

Among the 13,000 doses the VNA has administered at the Y were inoculations for 600 borough seniors who got their shots under a program coordinated by the borough Senior Center, according to director Jackie Reynolds.

• Monday marked the start of vaccine eligibility for all New Jersey residents aged 16 and up.

• The state’s confirmed COVID-19 death toll stood at 22,569 Monday, with another 2,592 fatalities classified as “probable” results of the pandemic, according to the state Health Department. Among the confirmed victims were 1,412 residents of Monmouth County, where 137 more death remained listed as probable.

• County officials reported these cumulative cases by town as of Monday: