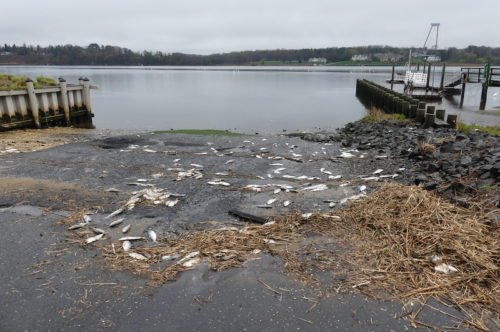 Clean Ocean Action has called on New Jersey environmental and health officials to hold a virtual town hall to provide updates and guidance for towns along the Navesink and Shrewsbury rivers, where massive menhaden die-offs have occurred recently.

“The cause, extent, and magnitude of the die-off is deeply concerning and raising alarm throughout the region,” COA executive director Cindy Zipf and staff scientist Swarna Muthukrishnan wrote Friday. “Feeding the concern is the lack of answers, conflicting answers, and lack of proactive response to the ever-increasing dead fish.”

Meantime, the New Jersey Department of Environmental Protection issued an update on the situation Friday. Here’s the DEP statement:

The NJ Department of Environmental Protection continues to investigate large menhaden die-offs impacting the Navesink and Shrewsbury rivers of Monmouth County. These mortality events appear to be only affecting Atlantic menhaden, an extremely abundant member of the herring family primarily harvested for bait and non-food commercial purposes. Similar largescale die-offs have been reported since the fall in coastal areas from Rhode Island to New Jersey.

Tests by the DEP’s Division of Fish and Wildlife indicate that the bacterium causing these mortalities closely resembles Vibrio anguillarum, a very common bacterium found in marine environments and one of numerous Vibrio species found in those environments. The DEP continues to work to more specifically identify the species and is working with the Atlantic States Marine Fisheries Commission and other states in the region to better understand these mortalities. However, menhaden, for reasons not understood at this time, may be particularly susceptible to infection from this bacterium. The DEP is investigating whether fluctuating water temperatures, altered menhaden migration patterns or other stressors are contributing factors.

Menhaden are typically not eaten by people or fished recreationally. There is no indication that any other fish, shellfish, bird or wildlife species are being impacted by this bacterium. It is safe to continue eating other species of fish that prey on menhaden. However, it is always advised to properly cook all fish or shellfish before consuming and to never collect and consume dead fish or any that appear ill.

This bacterium is generally not known to be harmful to humans. However, contact with water in areas where fish die-offs are occurring should be avoided as a precaution. Handling of dead or unhealthy appearing fish should be avoided, including collecting for bait. If handling is necessary for disposal purposes, wear appropriate protection, including gloves.

Menhaden die-offs are expected to continue in the near term. The DEP will continue to provide information to local governments as appropriate and provide any public advice or advisories as necessary. The fish will naturally decompose and become part of the nutrient cycle in affected waterways. Local governments, at their discretion, may remove fish from their riverbanks.

In response, Clean Ocean Action wrote that numerous questions remain to be addressed.

“There is growing concern and more information and direction is needed to help citizens and towns safely respond to this fish die-off, especially since it appears from NJDEP researchers it may linger for months,” Zipf and Muthukrishnan wrote.