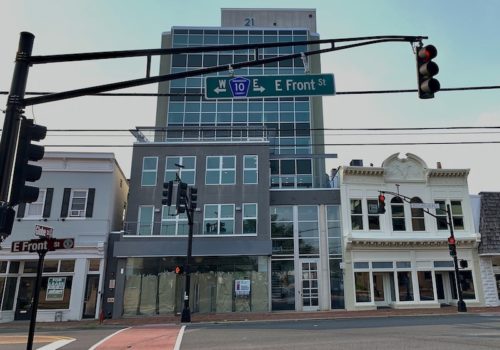 • For the second time since hearings began in April, developer Mumford has amended his proposed plan for apartments at 234-240 Shrewsbury Avenue, on the southwest corner of River Street. He’s dubbed the project “The Parker at Red Bank.”

The last round of changes garnered no support among board members when they met June 17.

The latest changes include the elimination of the fourth floor, so that the building would top out at three stories.

The ground-floor retail space has been reduced and replaced with two apartments, with windows on Shrewsbury Avenue. Overall, the building’s unit count was reduced to 16, from 20.

The original plan called for 23 apartments, with two of them located behind ground-floor stores.

The design changes also include a false dormer along the center of the roofline facing Shrewsbury.

• The agenda also lists a hearing for 96-98 West Front Street, on the northeast corner at Maple Avenue. The project is branded “Rivermark.”

There, next door to the library, the former owner, Mark Forman, obtained planning board approval in July, 2018 for a four-story building with eight apartments overlooking the Navesink River.

Forman sold the property without developing it, however. New owner 96-98 West Front Street LLC, with Samuel Shamaev of Middletown as a principal, demolished two long-vacant buildings on the property last October.

The revised proposal calls for two additional apartments, among other changes.

The company’s website, which indicates the business is already at that address, includes a Rolls Royce Phantom Coupe for rent at $2,500 per day, and a Lamborghini Huracan EVO Coupe for $1,300 per day.

The existing storefront would remain, and display vehicles would access the space through a widened door at the rear of the building, facing Union Street, according to an architectural plan.

In early 2019, Berardi obtained approval to open a sub shop in the space, but did not do so.

• At 136 East Bergen Place, Rory Fitzgerald is proposing a gym in a residential zone.

The details posted online are sparse, including several hand-drawn sketches of equipment.

The property is adjacent to the Santander bank branch on the northeast corner of Broad Street and East Bergen.

Here’s the full agenda, with links to all relevant documents.

The board is continuing to meet via Zoom until September 2, when it is scheduled to resume in-person meetings. Access and participation information can be found here.