RED BANK: PROJECT GETS NO BOARD SUPPORT 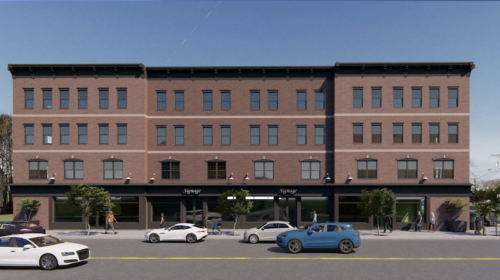 Twenty apartments would be built above stores at 234-240 Shrewsbury Avenue under a revised plan by developer Roger Mumford. (Rendering by Thomas J. Brennan Architects. Click to enlarge.)

A plan for 20 apartments and new retail space on Shrewsbury Avenue found no support from the Red Bank zoning board Thursday night.

It’s too tall, too dense, and too out of step with where things should be going, board members told developer Roger Mumford after three hours of testimony. 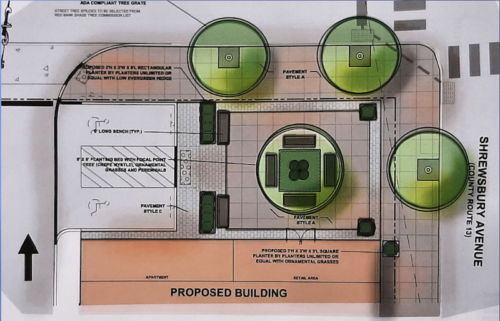 A detail of the proposed pedestrian plaza, which would be at the building’s northern end, at River Street and Shrewsbury Avenue. Below, a recent view of the corner. (Rendering by Thomas J. Brennan Architects; photo by John T. Ward. Click to enlarge.)

After a postponement over a document snafu last month, Mumford returned to the board for a Zoom hearing on a revised proposal, dubbed the Parker at Shrewsbury, for the southwest corner of Shrewsbury Avenue and River Street.

The plan calls for a four-story building with 20 apartments, down from the original 23; a 17-percent reduction in the area for ground-level retail, to 3,800 square feet; and an increase of two parking spaces, to 34.

In the process of shrinking the proposed structure, Mumford also added a pedestrian plaza at the corner.

The plan, and Mumford himself, won endorsements from some residents, some of whom noted his role in restoring and donating the T. Thomas Fortune House on Drs. Parker Boulevard for use as a cultural center.

Gilda Rogers, an officer at the center, called Mumford “one of the most culturally conscious developers” around. Sue Viscomi thanked him for his “commitment to Red Bank” as evidenced by other residential projects he’s erected in town.

But others were critical. William Poku and his wife, Theresa Poku, of Bank Street, pressed Mumford on the adverse effects the Parker might have on affordability in  the neighborhood.

Mary-Ellen Mess said it would feed into a “domino effect” of “oversized projects contributing to what I consider to the deterioration to our quality of life.”

Alecia Wilkerson voiced concern about impacts on infrastructure, including sanitary sewers and water.

The proposal appeared doomed as board members weighed in.

• Board Chairwoman Lauren Nicosia called the project “too dense,” with a too-narrow sidewalk on Shrewsbury Avenue.

“Go down to three stories and I might be more inclined” to vote in favor, she said.

• Ray Mass said he had voted in favor of an earlier Mumford project, Station Place, on Monmouth Street, in 2011, “but not the look” of the final product.

“I have gotten nothing but negative comments on Station Place,” he said. “It’s too stark. This building has the same look.”

• Bruce Maida, who on Thursday officially lost his race in the Democratic primary for a council seat, said the board should “pause variances” on large projects with a moratorium while the planning board writes an update to the  Master Plan.

But Mumford’s attorney, Craig Gianetti, responded that “it’s actually illegal” to prevent a pending application from being heard.

• “Red Bank’s asset has been as a family-friendly town,” said board member Sharon Lee, a former council member. “Single family homes – that’s the only way you’re going to bring back what we knew as the old Red Bank.”

She acknowledged that “in this environment, that may be just a pipe dream.”

The hearing was scheduled to continue July 15.

A scheduled hearing on a plan for 10 apartments at 273 Shrewsbury Avenue, on the northeast corner at Drs. James Parker Boulevard, was postponed at the applicant’s request to September 2.

That meeting is the expected to be the board’s first in-person session since the start of the COVID-19 pandemic in March, 2020.