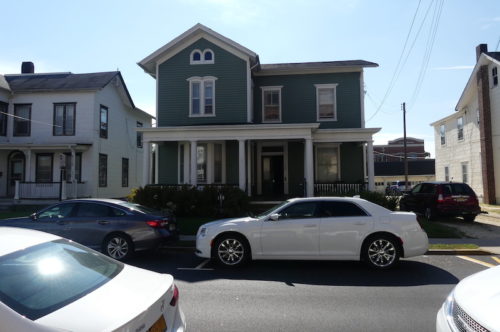 The house at 26 Wallace Street, believed to have been built in 1889, would be razed to expand a parking lot under a developer’s proposal. (Photo by John T. Ward. Click to enlarge.) 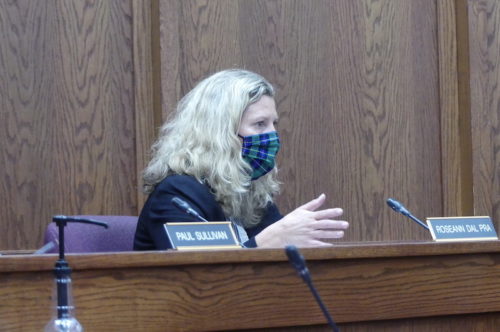 Three years after the borough council adopted an ordinance giving the HPC more say in the development review process, board members pushed back on an assertion by the Red Bank Charter School that the HPC doesn’t have jurisdiction over its plan to rebuild its front porch.

In a separate matter, they also signaled that a private developer who wants to demolish a 132-year-old downtown house should not be allowed to waltz past the commission’s denial.

With four of the commission’s seven members present and member Chris Fabricant filling in for absent Chairwoman Michaela Ferrigine, here are some of the highlights from the session:

• The charter school, a portion of whose Oakland Street campus includes a century home relocated from East Front Street in 2003, hopes to repair its front porch, replacing painted-wood elements such as columns with synthetic materials.

No one from the school was present at the meeting, though two officials appeared at the October session to detail the plan. In the interim, board members toured the site.

Also in the interim, according to commission Attorney Sean Byrnes, charter school board trustee Roger Foss, an attorney, had contacted him to say that, while the school welcomed the commission’s opinions, it did not believe it was bound to its decisions. Foss cited state law and case law, Byrnes said.

Byrnes said the school had not adopted an “adversarial” position, but board member Roseann DalPra, an attorney, disagreed.

“It does seem adversarial, if they’re taking the position that they’re exempt from the historic preservation regulations,” she said. She suggested the borough council weigh in on the matter.

Byrnes said he would dig deeper into the jurisdiction question.

• A month after it denied a request by Downtown Investors to raze the house at 26 Wallace Street, commission members wanted it known that the zoning board, which is scheduled to take up the application December 2, should not vote on it without first conducting an appeal of the HPC decision.

Downtown Investors principal Jay Herman told redbankgreen in October that while the house may look nice from the outside, thanks to vinyl siding, its is in “an extreme state of disrepair” inside, and would require “a bloody fortune” to restore.

The firm’s plan is to demolish the structure and add 30 spaces to an adjoining parking lot the firm owns on Linden Place, Herman said. One of the spaces may be set aside for a drive-thru ITM, or interactive teller machine – an ATM that enables users to communicate remotely with a bank employee.

The HPC, however, unanimously rejected the plan last month because, Fabricant told redbankgreen, “our obligation as the Historic Preservation Commission is to discourage demolition of historic properties and enhance the neighborhood by preserving such structures.

No one from Downtown Investors was present Wednesday night, and Herman did not immediately respond to redbankgreen request for comment.

• Left unresolved was a proposal by the Dublin House Pub to alter its Monmouth Street facade, as a detailed by redbankgreen.

After two hearings, at which the board signaled it was not inclined to approve the changes, the matter was tabled last month to allow pub owners Eugene Devlin and Sean Dunne to make possible changes.

No one from the business appeared at Wednesday’s meeting, and the matter was carried for another month.