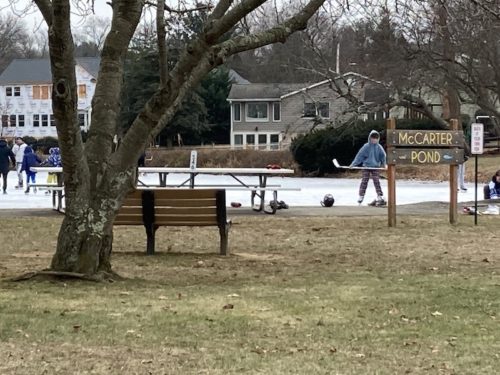 The incident occurred near the center of the pond, the rescued skater said. (Photo by JoAnn Pileggi. Click to enlarge.)

Fast-acting hockey players rescued a Fair Haven woman after she fell through the ice on McCarter Pond Sunday morning.

The 48-year-old woman, who asked that her name not be used, was skating with a friend when she fell through the ice at about 10 a.m., she told redbankgreen.

She was “shocked” to find herself in frigid water, and though she did not touch bottom, was not fully submerged, she said.

The friend grabbed the woman’s hand, but the ice around her began breaking when two men who had been playing hockey used their sticks to pull the victim out.

The woman went home without any injuries.

The women had skated the pond in recent days, being careful to stay near the edge, the woman said, but she had “drifted” into an area toward the center that was covered with a light dusting of snow when the ice gave way, she said.

She called the incident a “good reminder of those childhood lessons” about ice safety, including staying close to shore.