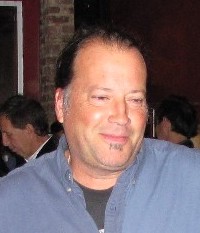 Bruce “had not been seen or heard from for several days during which time his family became concerned,” according to a police statement issued late Saturday.

“Over a short period of time, the family learned that Bruce was possibly living in a basement storage unit that he was renting” in the Professional File Storage facility, located at Maple Avenue and West Front Street, the statement said.

A family friend went to look for Bruce at the facility, located beneath the City Centre strip mall, and found his body at about 6:30 p.m. in a closed but unlocked self storage unit, according to police Chief Darren McConnell.

Laura Dardi, Bruce’s widow, told redbankgreen Sunday that her late husband, who sold his merchandise online, had not been living in the facility. Separately, another family member disputed the police assertion, as did Samantha Bowers, of the Philip J. Bowers and Company, which owns the storage business.

“He wasn’t living there,” Bowers said, nor did he use the unit as an office, as another Bruce relative wrote on Facebook.

Bowers said Bruce kept inventory in the unit, and “was constantly back and forth” between the facility and the UPS store a few doors away on White Street.

McConnell told redbankgreen via text Monday that the family friend “told initial responding officers that he thought the decedent may live or stay in unit at times.” In addition, “there were indications of that present when officers responded,” McConnell said.

Foul play does not appear to have been a factor in Bruce’s death, which remains under investigation, McConnell said.

The police account was first reported by redbankgreen, which has been unable to learn Bruce’s place of residence at the time of his death.

Bruce’s expertise in pop culture memorabilia landed him a spot as a cast member on the reality TV show ‘Comic Book Men,’ which ran for several seasons on the AMC channel. The show was recorded in filmmaker Kevin Smith’s Broad Street comic book shop, Jay and Silent Bob’s Secret Stash.